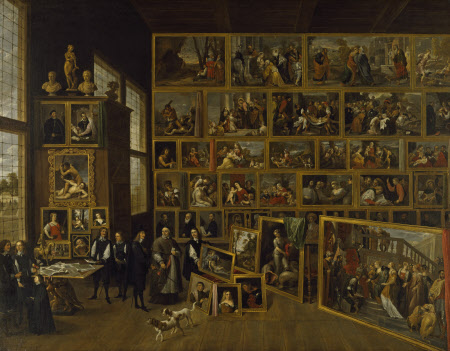 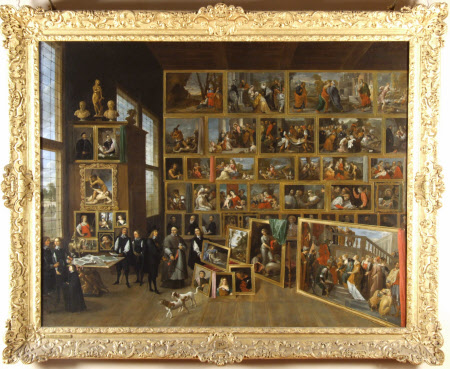 In 1651 Teniers was appointed Court Painter to the Archduke Leopold William (1614-1661), Governor of the Spanish Netherlands. He therefore, in essence, became the curator of the Gallery formed by the Archduke in the Coudenberg Palace at Brussels. This was also the year in which he painted the first three of his eleven imaginary depictions of the gallery. The compositions vary, but the most elaborate are that of the present painting and the almost identical scene, which is now in the Kunsthistorisches Museum, Vienna. It seems likely that the present picture was the very first of them, since it was when staying with Antoon Triest, Bishop of Ghent, in November 1647, that Leopold Wilhelm first made the acquaintance of the artist and his pictures. Triest is shown in the picture, and was probably also the recipient of it. Most of the pictures are identifiable today.

Oil painting on canvas, The Brussels Picture Gallery of the Archduke Leopold Wilhelm of Austria (1614-1662) by David Teniers the younger (Antwerp 1610 - Brussels 1690), bottom left: DAVID * TENIERS ** FEC / 1651. Teniers himself, as Keeper of the Archduke Leopold's collection, standing, centre, exhibiting a Lamentation (or Pietà) by Annibale Carracci to the Archduke, who is pointing with his stick to a portrait by Catena, to Bishop Antoon Triest. The Archduke owned 517 Italian High Renaissance pictures, many of which were acquired from the English royal collection after the execution of Charles I in 1649. Other members of his entourage are grouped round a table in the window-bay. Most of the pictures are arranged frame to frame in five rows on a screen-like wall, with consequent distortions in their relation proportions. The setting ought to be a room in the Coudenberg Palace in Brussels, but is probably in fact imaginary. A pair of dogs trot in front of the pictures on the floor.

In 1651 Teniers was appointed Court Painter to the Archduke Leopold William (1614-1661), Governor of the Spanish Netherlands, and thus became de facto curator of the Gallery formed by the Archduke in the Coudenberg Palace at Brussels. This was also the year in which he painted the first three of his eleven imaginary depictions of the gallery. The compositions vary, but the most elaborate are that of the present painting and the almost identical scene, which is now, with the majority of the Archduke's pictures, in the Kunsthistorisches Museum at Vienna. It seems likely that the present picture was the very first of them, since it was when staying with the depicted – and probable recipient of the picture – Antoon Triest in Ghent in November 1647 that Leopold Wilhelm first made the acquaintance of the artist and his pictures. For the identification of the famous pictures which are crowded upon the walls (Speth-Holterhoff 1957) and the entry in the Teniers exhibition catalogue of 1991. The Petworth picture differs from the Vienna painting in its inclusion of the rival collector, the Bishop of Ghent, Antoon Triest, who occupies the prominent position between the Archduke and the artist. The other figures have not been identified, except for the dwarf-like man at the left, in front of the table supported by Duquesnoy’s Ganymede, who is the court chaplain and painter Jean-Antonine van der Baren (one of whose still-lifes, which probably originally belonged to Archduke Leopold, is now at Powis Castle), and thevalet de chambre on the far left, who is the High Chamberlain Johann Adolf, Graf von Schwarzenberg. The genre of picture-gallery paintings was well established in Flanders by the time that Teniers came to paint his.T he significant innovation of Teniers was - no doubt at the behest of his employer - to include representations of an actual collection of pictures, a kind of pictorial inventory of a significant part of the collection, and thus a precursor of the graphic inventory that Teniers did go on to make, by painting small reductions on panel of each of the Archduke’s paintings, which were then engraved to form a visual compendium in the Theatrum Pictorium, whose first edition was published (after the departure of the Archduke for Austria) at his own expense in 1660. Even more singular is the fact that the three representations of 1651 are exclusively of pictures painted in Italy, mostly Venetian, and from the collection formed in Venice by Bartolomeo della Nave, which had been acquired by Lord Fielding, the English ambassador in Venice, for Charles I on the instructions of the 1st Duke of Hamilton, but had remained on the latter’s hands when they arrived in England in 1639, because of Charles I’s inability to pay for them. After Hamilton’s execution in 1649 they were sold in 1651, and it is probable that Teniers was the agent sent by the Archduke to England to purchase them. In this and the Vienna painting the Archduke is shown indicating a portrait by Catena with his cane. Only in the Petworth version does Teniers himself actually hold the Pietà by Annibale Carracci. Worth noting is the prominence given to the Saint Margaret, from the Priuli collection, which was then prized as a prime original by Raphael, but is now thought to have been executed with the aid of his workshop (the copy that Teniers made of this for the Theatrum Pictorium is in the Glasgow Art Gallery; see Dutch and Flemish Paintings, 1961, no.37, vol.I, p.134; vol.II, ill.p.24). In all these pictures of 1651 it is singled out by a curtain (here and in the Vienna picture carelessly draped over a corner of it, in the Brussels painting carefully drawn back on its rod). Here and in the Vienna version the other paintings to be singled out by curtains are the Titian portraits of Fabrizio Salvaresio and Jacopo Strada (top left), Dosso’s Saint Jerome, Palma Giovane’s Cain killing Abel, Palma Vecchio’s Sacra Conversazione, Saraceni’s Judith, and Jacopo Bassano’s lost Christ carrying the Cross. Quite why just this last and only three other paintings are shown in ‘Sansovino’ frames is unclear (the most prominent, the Cain and Abel, has now been identified (Garas 1980) as a Manfredi, despite its inscription as a Correggio. It may also be presumed that the pictures placed on the floor in the foreground were particularly prized. In addition to the Catenaand the Raphael, they comprise (from right to left): Paolo Veronese’s Esther before Ahasuerus, Uffizi; Titian’s ‘Bravo’(then ascribed to Giorgione), a lost Pastoral landscape by Paul Bril, and Titian’s ‘Violante’ (then - and by some still - thought to be by Palma Vecchio). The sole differences between the present painting and the Vienna version, are Teniers being placed alone, in the place of Bishop Antoon Triest, in the latter, and the omission in the present picture of the Antique bust of a woman on a Venetian parcel-gilt wooden pedestal (which is also given prominence in the Brussels picture); together with the fact that the two dogs (whom Margret Klinge, exh. cat. 1991 sees as symbolic of the friendly rivalry between the Archduke and the Bishop as collectors – a rather improbable suggestion, when the Bishop himself is not shown) are shown side by side, wrestling over a stick, in the latter. Although the paintings are here shown hung frame to frame (in defiance of all probability, in view of their respective sizes, though the method of displayis one that was to be adopted - and still survives in - certain Austrian abbeys and Russian palaces), they may at this stage (in 1651) not yet have been hung at all. Whereas those at Petworth were always to have some space between, there is a great aptness in the presence of this representation of Archduke Leopold’s picture gallery in the collections of the 2nd and 3rd Earls of Egremont at Petworth, since they were equally voracious - if less fortunate - collectors.

Painted for Archduke Leopold Wilhelm von Habsburg (1614–1662), Statholder of the Spanish Netherlands (1647–1656), probably as a gift for Antoon Triest, Bishop of Ghent (1576-1657); his possessions appear to have passed to his sister, Marie, but then are lost track of. This picture must have stayed in Flanders, to be acquired, in all probability by a member of the de Peeters family of Antwerp (who also owned a number of paintings by Van Dyck), by one of whom, or at the death of one of whom, bought or sent over to London for sale; bought at the John de Peeter's sale, Prestage, on 2 April 1756, lot 31 for £241 by the 2nd Earl of Egremont (1710-1763) (his second most expensive acquisition) and was listed in the North Gallery in 1835. Thence by descent, until the death in 1952 of the 3rd Lord Leconfield, who had given Petworth to the National Trust in 1947, and whose nephew and heir, John Wyndham, 6th Lord Leconfield and 1st Lord Egremont (1920-72) arranged for the acceptance of the major portion of the collections at Petworth in lieu of death duties (the first ever such arrangement) in 1956 by HMTreasury.