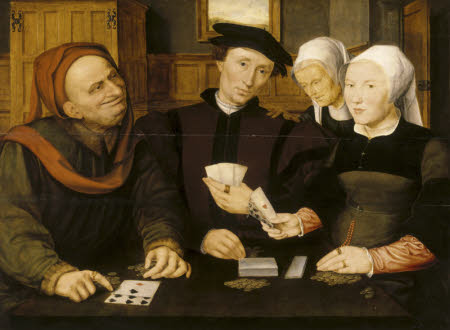 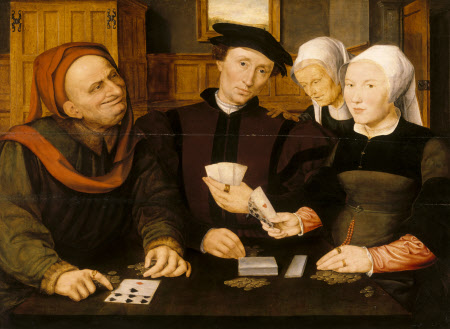 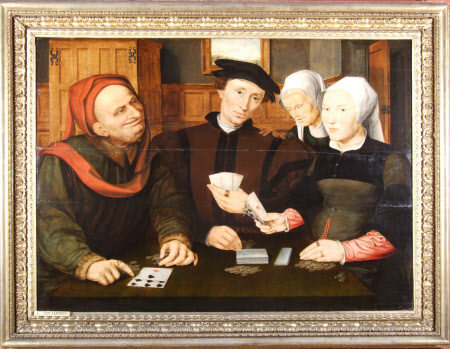 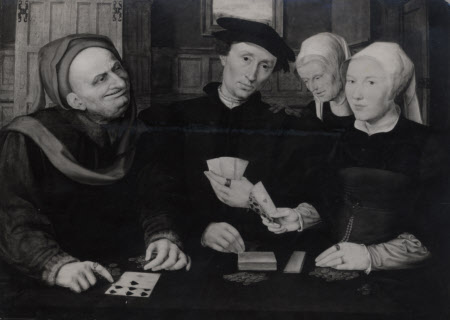 This genre scene was described in 1755 as ‘The Artist and his Family at Cards.’ The central figure certainly looks like a portrait, but it cannot be established with any certainty as to whether he is indeed the artist. Later, in the 1920s, the additional title of ‘The Prodigal Son’ was apparently introduced. However, the reason for this is not clear. The scene probably has a moralising undertone. The old man (cardsharp) is looking lasciviously towards the young girl (who, nevertheless, holds the ace of hearts and guards her coins) whilst the central male figure, consoled by an elderly lady, seems to have been fleeced and the money is being gambled away. This picture, bought by Charels Wyndham, 2nd Earl Egremont. was far from a conventional purchase in the eighteenth century. It was relatively expensive at £48.6 and his only 16th-century northern European acquisition.

Oil painting on panel, The Card Players by Jan Massys (Antwerp c.1509 - Antwerp 1575), circa 1540. Called the Prodigal Son in 1920, four card players, including a young man centre, full face in deep copper red. At left, is an old publican wearing a red hood and green blouse. On the right-hand side is a girl, and an old woman, both three-quarters left. On the table are cards and money, with a background of a panelled wall and an open window. The old man on the left derives from a picture by the artist's father Quentin Metsys (Massys) (1465-1530) of Money-Changers and the picture was thought to be of him and his family and by him until the mid-19th century. Jan Massys was banished from Antwerp in 1544 but returned in 1558 and where he died.