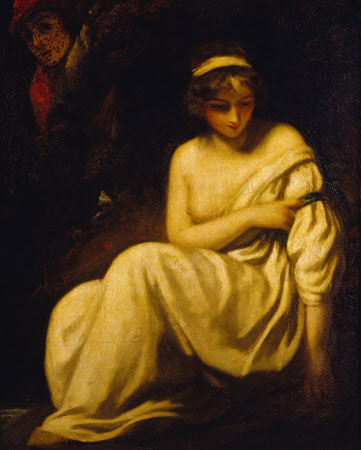 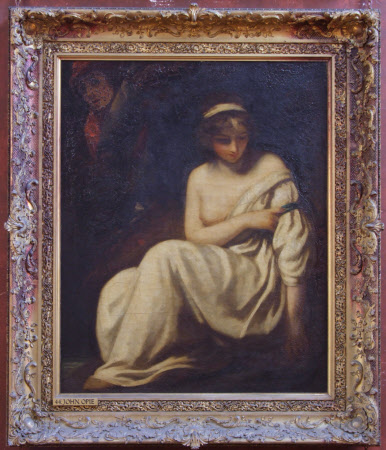 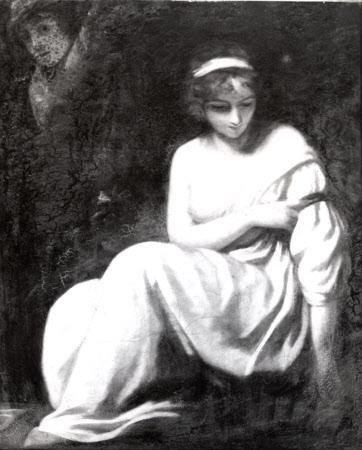 This picture illustrates a scene from the poet James Thompson’s ‘Seasons’ of 1730. Damon and Musidora appear in ‘Summer’. Damon is sitting by a stream when his love, Musidora appears, thinking she is alone, she proceeds to undress in order to bathe. The scene is derived from ‘Daphnis and Chloe’ by the Ancient poet, Longus, but in that instance, it was Chloe who spies her love Daphnis preparing to bathe. The scene is a test of Damon’s fidelity and love. The artist painted the same subject more than once and another version is in the Egremont private collection, also at Petworth.

Oil painting on canvas, Damon and Musidora by John Opie, RA (St Agnes 1761 – London 1807), circa 1788. The country girl Musidora seated, full-length, by a pool and preparing to bathe. Her shoulders and right breast are bare; and she is wearing a white dress with a blue sash. In the left upper corner Damon can be seen behind a tree. From James Thomsons' s The Seasons - Summer (1727): "Thrice happy swain! A lucky chance, that oft decides the fate Of mighty monarchs, then decided thine. For lo! conducted by the laughing Loves This cool retreat his Musidora sought: Warm in her cheeks the sultry season glow’d, Her fervent limbs in the refreshing stream. What shall he do? in sweet confusion lost, And dubious flutterings, he awhile remain’d: A pure ingenuous elegance of soul, A delicate refinement known to few, Perplex’d his breast, and urg’d him to retire: But Love forbade."

Owned by Sir John Leicester 5th Bt & 1st Baron de Tabley (1762-1827) and displayed in his gallery at Tabley House, Cheshire; bought at his posthumous Christie's sale on 7 July 1827, for 79 gns. for the 3rd Earl of Egremont (1751- 1837); thence by descent, until the death in 1952 of the 3rd Lord Leconfield, who had given Petworth to the National Trust in 1947, and whose nephew and heir, John Wyndham, 6th Lord Leconfield and 1st Lord Egremont (1920-72) arranged for the acceptance of the major portion of the collections at Petworth in lieu of death duties (the first ever such arrangement) in 1956 by HMTreasury; formal transfer of ownership by H.M.Treasury to the National Trust on 20 September 1990.

Young 1821 John Young, A Catalogue of Pictures by British Artists in the possession of Sir John Fleming Leicester, Bart [...] including the pictures in his gallery at Tabley House, Cheshire [...], London, 1821, [1825], p.7, no.14 Waagen 1854-7 Gustav Waagen, Treasures of Art in Great Britain, 3 vols. (translated by Lady Eastlake) with a supplementary volume: Galleries and Cabinets of Art in Great Britain, London, 1854-7, vol.III , p.39 Earland 1911 Ada Earland, John Opie and his Circle, 1911, p.343 Collins Baker 1920 C.H.Collins Baker, Catalogue of the Petworth Collection of Pictures, in the possession of Lord Leconfield, privately printed by the Medici Society, London, 1920, 44