The Rape of Europa 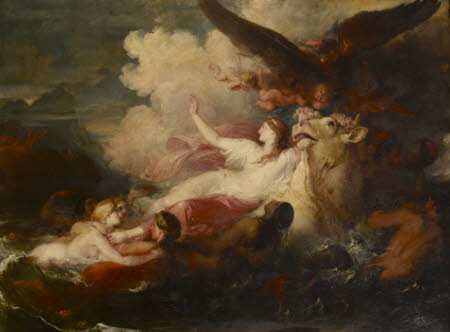 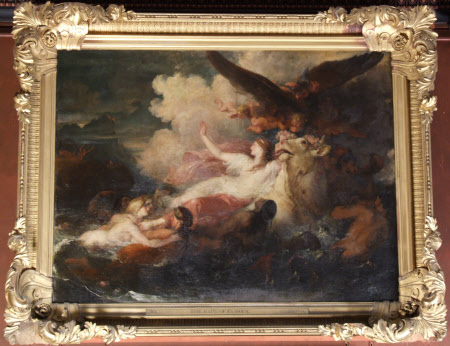 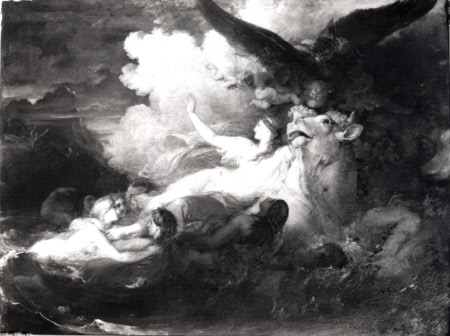 The subject is taken from the Roman poet Ovid’s ‘Metamorphoses’. The god Jupiter fell in love with a princess, Europa, and disguising himself as a bull, came to where she played by the seashore with her attendants. Beguiled by the bull, she garlanded him with flowers and climbed upon his back. Jupiter then bore her off to sea, carrying her to Crete, where he resumed his normal shape and ravished her. This picture was clearly inspired by Titian’s of the same subject. Now in the Isabella Stewart Gardner Museum in Boston, it was then in the collection of the Earl of Darnley, and had been exhibited at the British Institution in 1816. Hilton is best known today for his portraits of the poets John Keats and John Clare. However, he was successful in his lifetime for his history paintings in the ‘grand manner.’ This work was painted in 1818 for Sir John Leicester.

Oil painting on canvas, The Rape of Europa by William Hilton the younger RA (Lincoln 1786 - London 1839), 1818. Europa is in white, on the bull, centre, looking profile left towards the receding shore. At her feet Nereids are swimming and at right are Tritons. Above is Jove's (Jupiter/Zeus) eagle. According to a translated version in to English of Ovid's Metamorphoses: "In flow'ry wreaths the royal virgin dress'd His bending horns, and kindly clapt his breast, Till now grown wanton, and devoid of fear, Not knowing that she press' the Thunderer, She placed herself upon his back, and rode O'r fields and meadows, seated on the God. He gently march' along, and by degrees Left the dry meadows and approach' the seas, Where now he dips his hoofs, and wets his thighs, Now plunges in, and carried off the prize. The frighted Nymph looks backward on the shore And hears the trembling billows round her roar; And still she holds him fast .. Her train of ruffling garments flies behind, Swells in the air, and hovers in the wind." This was Hilton's first secular commission. It would have been inspired by Titian's Rape of Europa now in the Isabella Stewart Gardner Museum, Boston but then in the collection of the Earl of Darnley at Cobham Hall, who had just acquired it himself from Thomas Noel Hill, 2nd Lord Berwick (1770 - 1823) of Attingham Park (NT). Jupiter and Europa, as it was then called, was exhibited only two years before, in 1816 at the British Institution, a private exhibiting society with the aim of encouraging native talent and showing living artists alongside Old Masters.

Recto: Tablet on bottom of frame, inscribed. 30. THE RAPE OF EUROPA HILTON