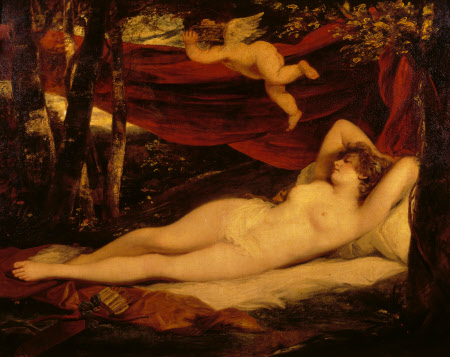 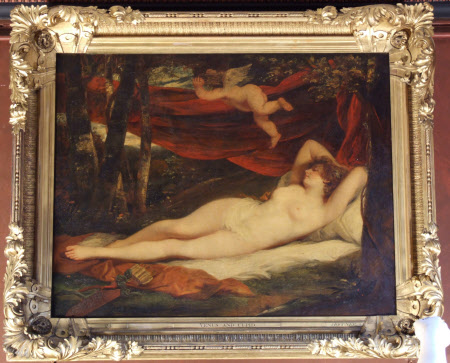 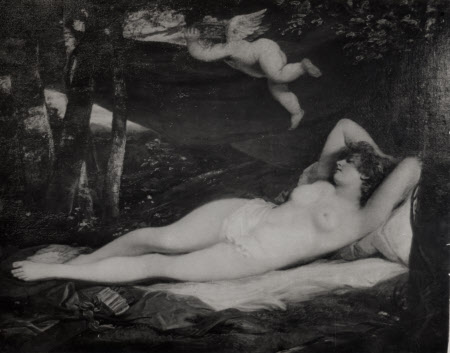 This picture was first exhibited in 1806 as ‘A Sleeping Nymph’, when the title was accompanied by six lines of verse. At one time the reclining nude was identified with Miss Emily St Clare, although this is questionable. A letter from Hoppner to Sir John Leicester (for whom this was painted) acknowledges the receipt of 170 guineas for a ‘Portrait of Miss St Clare’ and 300 guineas for ‘my picture of a Sleeping Nymph.’ Hoppner did do a subject picture of her, but as of a ‘Lady Dancing’ (now in the Nelson Atkins Museum of Art, Kansas City), in the guise of a muse. Originally the nymph was completely nude, but Sir John requested some covering. He wrote to Hoppner that ‘ … imagination must have something left to make the thing compleat …. To meet this idea Mr H will not perhaps object … to throw a veil over a part of ye Body.”

Oil painting on canvas, Sleeping Nymph and Cupid by John Hoppner, RA (London 1758 – London 1810), 1806. Nymph lying naked, with her head right and her arms above her head. Above her a red drapery for a canopy; Cupid can be seen flying over her. A forest glade setting. Hoppner believed this to be his masterpiece. A poem accompanied the painting when it was exhibited at the Royal Academy in 1806: "As on her arm reclines the sleeping fair, And with her breath the loitering gale perfumes, Love sees, or thinks he sees, his mother there, And nearer earth directs his glittering plumes; Hovers with fond delight around her bower, And swells the fragrance with a roseate shower." Sir George Beaumont (1753 - 1827), founder of the British Institution in 1805 and instigator of the foundation of the National Gallery in 1824, on reviewing the painting wrote: "... the best coloured picture that has been painted since Sir Joshua's death...In the white drapery He has discriminated as Sir Joshua did, & given effect to the flesh by the contrast but had almost confounded the colour of it with the flesh." It has been suggested it represents Sir John Leicester's mistress Miss Emily St Clare before he married Georgina Cottin in 1810. It was engraved in mezzotint by William Ward, ARA (1766-1826) and exhibited in 1808 when Sir John himself bought it, which gave rise to that supposition.