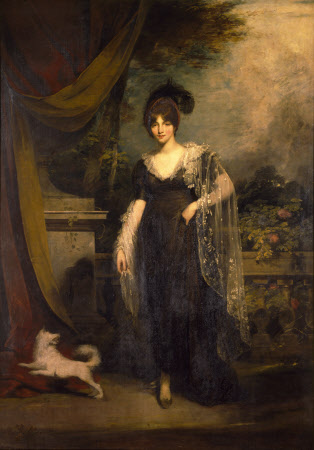 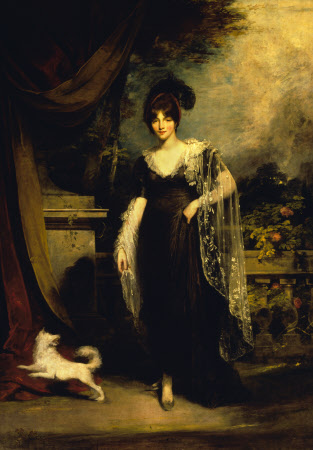 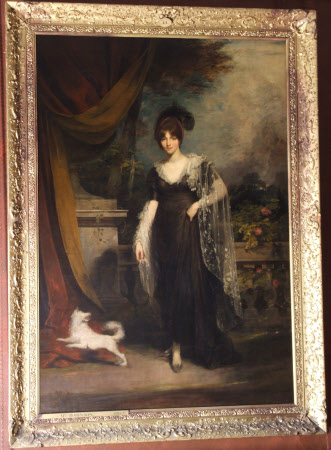 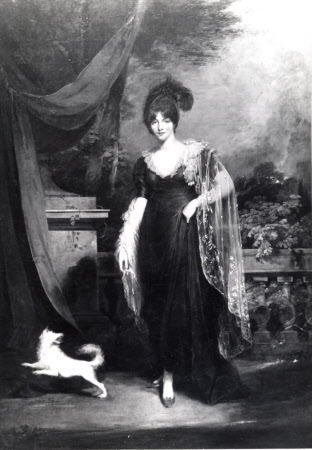 Mary Darby, Mrs Thomas Robinson, was an actress, known as ‘Perdita’. At the age of 18, she appeared in Drury Lane as Juliet in Romeo and Juliet and instantly became famous. She then played Perdita in ‘A Winter’s Tale’, and in 1779 she was taken up by the Prince of Wales (later George IV) and became his mistress. Within three years he had abandoned her, and despite later becoming a famous hostess, writing poems and plays, she died destitute. If this picture does represent Mrs Robinson, it is possible, judging by her age, that it was painted some ten years before it was exhibited at the Royal Academy (1803) (where it was described simply as ‘Mrs Robinson’). It is true that the resemblance between this and the majority of accepted portraits of ‘Perdita’ is slight, but there does exist an engraving which bears similarities with the present portrait. Moreover the stance of the figure in this painting is on the theatrical side.

Oil painting on canvas, Called Mary Darby, Mrs Thomas Robinson, known as ‘Perdita’ (1758-1800) by William Owen RA (Ludlow 1769 – London 1825), circa 1792/1803. A full-length portrait, standing, full face, on a terrace, with her left arm akimbo wearing a deep brown dress, lace shawl and a black plumed hat; a white lap dog is in the left corner and a deep red and gold curtain is at left.

In the 3rd Earl of Egremont's collection by c.1827 when appeared in a painting by J.M.W. Turner c.1827 of the North Gallery hanging in the north bay over the chimneypiece.; thence by descent, until the death in 1952 of the 3rd Lord Leconfield, who had given Petworth to the National Trust in 1947, and whose nephew and heir, John Wyndham, 6th Lord Leconfield and 1st Lord Egremont (1920-72) arranged for the acceptance of the major portion of the collections at Petworth in lieu of death duties (the first ever such arrangement) in 1956 by HM Treasury