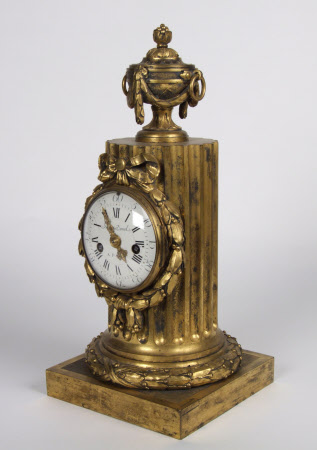 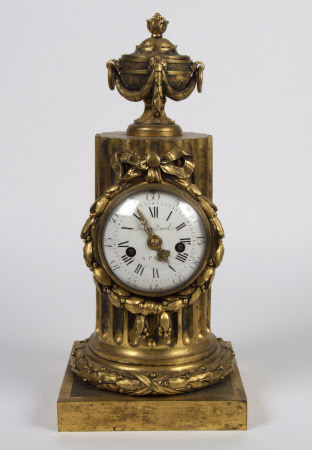 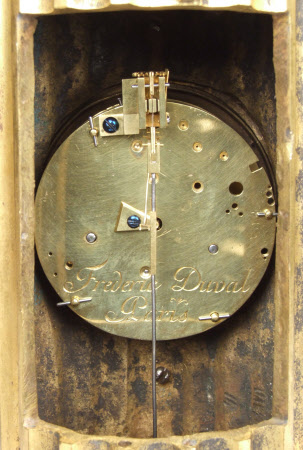 Eight-day French mantel clock in ormolu case, by Frederic Duval, Paris, c.1785. Two-train, four pillar going-barrel movement with anchor escapement and Brocot pendulum suspension. Originally the movement had count-wheel half-hour striking on a bell, mostly now removed. The back plate is engraved: “Frederic Duval AParis”. 9cm diameter convex white enamel dial with black roman numerals and arabic five-minute figures, with gold spots on the minute circle at the hours. Signed as back plate in the dial centre, and with regulation squareat XII. Pierced gilt-brass hands. Ormolu case in the form of a truncated, fluted pillar, standing on a square base and encircled by a laurel wreath at the base and around the dial. The rear of the base is stamped: “OSMOND”. The dial is covered with a convex glass in an ormolu bezel. The case is surmounted by an ormolu urn with swags. A portion of the fluted pillar at the rear, unlatches and removes to expose the movement. Note: The movement would originally have had a silk pendulum suspension. Unfortunately the whole of the striking work, except the barrel arbor, has been removed from this movement at some stage. Frederic Duval is recorded as a clockmaker working in Paris in rue Mazarine in 1777-8 and in rue Jacob in1781. Robert Osmond was a celebrated fondeur (maker of fine cast metal objects) of Paris (working in rue Maclou in 1773) who worked for most of the great Parisian clockmakers of the day.