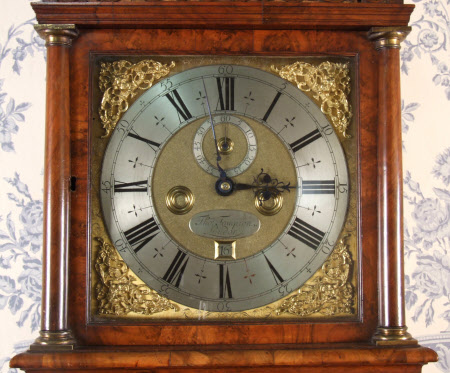 Month going longcase clock in walnut veneered case, No. 347 by Thomas Tompion, London, c. 1700 Two train, six pillar movement with anchor escapement, bolt-and-shutter maintaining power and external count-wheel hour-striking on bell. The movement is stamped “347” on the lower middle backplate. 11” square brass dial with cherub and scroll spandrels and engraved quarters. Silvered brass chapter ring with roman numerals and arabic five-minute figures, half-quarter markers, typical Tompion-style ‘dagger’ half hour markers, and quarter hour circle. Seconds dial, ringed winding holes, square calendar aperture and oval silvered-brass name plate engraved: “Tho. Tompion / London” all in a matted dial centre (Note: under this plate the dial is signed by Tompion with his erstwhile partner Edward Banger in a shaped and engraved cartouche). Pierced blued steel hands. Burr walnut veneered case with oak carcass. Caddy top hood with inverted bell top, surmounted by three lacquered brass ball finials. Long, glazed windows to sides and swivelling metal catch to lock hood onto trunk. Rectangular trunk door stamped “374” on vertical edge on open side. Tall skirting to plinth around base. Note The case has undergone a number of alterations. The hood was originally rising (grooves still present on inside of hood sides) and has been converted to sliding, necessitating creating an opening hood door on the front. The skirting around the base is also later; the clock would probably have stood on bun feet originally and the case as a whole has probably had quite a bit of restoration over the years. There is a hollowing out on the backboard near the back cock which has no obvious purpose, and there is a loose board, set into the middle of the backboard, presumably for fixing the clock to the wall securely. Known as ‘The Father of English Watchmaking’ Thomas Tompion (1639-1713) is one of the most celebrated of all English clockmakers.

Bought from George Graham, executor of Tompion, in 1713 for £16.12s. By descent, until the death in 1952 of the 3rd Lord Leconfield, who had given Petworth to the National Trust in 1947, and whose nephew and heir, John Wyndham, 6th Lord Leconfield and 1st Lord Egremont (1920-72) arranged for the acceptance of the major portion of the collections at Petworth in lieu of death duties (the first ever such arrangement) in 1956 by H.M.Treasury.