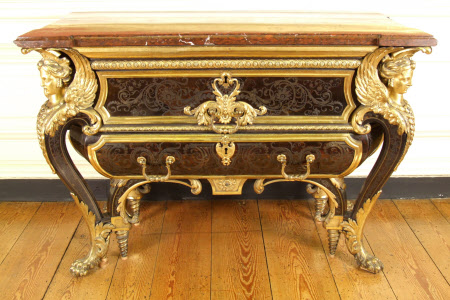 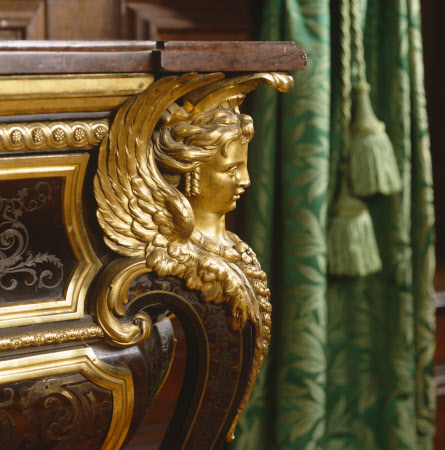 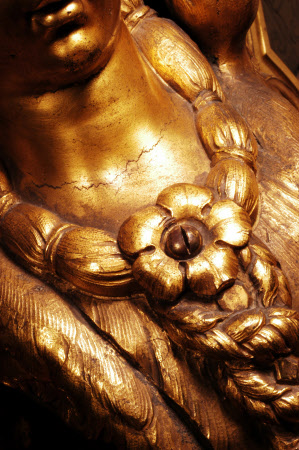 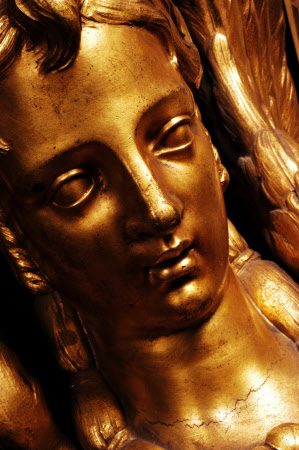 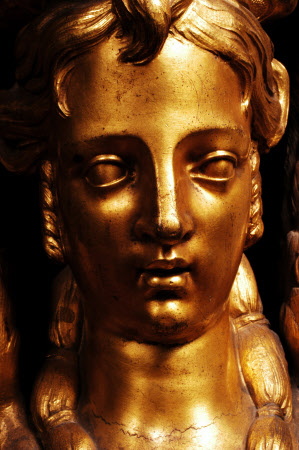 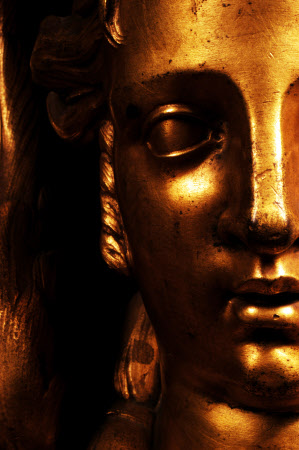 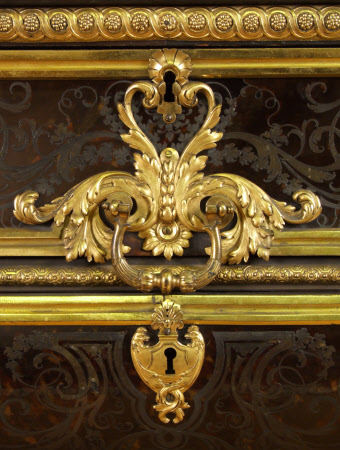 A commode by André-Charles Boulle (1642-1732), circa 1710, veneered with ebony, brass and tortoiseshell marquetry 'en première partie', opening with two drawers, mounted with gilt bronzes, ebonised back.

A commode by André-Charles Boulle (1642-1732), circa 1710, veneered with ebony, brass and tortoiseshell marquetry 'en première partie', opening with two drawers, mounted with gilt bronzes. The celebrated design of this 'sarcophagus-shaped' commode was created by André-Charles Boulle himself, originally for a pair of commodes intended for King Louis XIV (1638-1715) Bedroom at the Grand Trianon, delivered at Versailles in 1708 (now on display in the Château de Versailles). Of a new form, these prototypes were designated at the time as 'bureaux' according to payments to Boulle in 1708 and 1709 recorded in the 'Comptes des Bâtiments du Roi'. As suggested by Peter Hughes they can also be seen as ‘being a combination of a console table with the newly-emerging commode’. Their sculptural quality due to their unusual shape but also the extraordinary bronze corner mounts of winged sphinxes' busts above the naturalistic lion's paw and acanthus feet have placed these commodes amongst the masterpieces of furniture history. Beyond the characteristic marquetry, the perfect coordination between the cabinet work and the gilt bronze sculptures are the signature of André-Charles Boulle, pointed out to the King by Colbert as 'the most skillful in his trade'. The commode at Petworth is almost identical in design to the pair made for Louis XIV except for the stepped gilt bronze ormolu moulding below the marble top which is absent on the Versailles pair. The Rosso Verona marble top is not original (probably fitted between 1853 and 1882 - the marble top visible on the photography taken for the Gore House exhibition in 1853 differs from the description in the Hamilton sale catalogue). André-Charles Boulle made a few examples of this commode as when he transferred his workshop to his four sons, in 1715, three were inventoried: 'pareilles à celle du roi à Trianon'. Such commodes could also be found in prestigious collections across the 18th century: the marquis de Marigny owned one, as well as Randon de Boisset (with a marquetry top) and the Comte d'Artois. Today, apart from the pair made for Louis XIV and the Petworth commode, one can be seen at the Metropolitan Museum in New York (The Jack and Belle Linsky collection) and a pair in the Château de Vaux le Vicomte (bearing the stamps of Saint-Germain and Levasseur). The Petworth commode was purchased by the 2nd Lord Leconfield from the London dealer Colnaghi after the legendary Hamilton Palace sale in London in 1882, where it fetched the then enormous sum of "£1.081 10s" (lot 994). The commode was recorded in 1876 in the sitting room of Hamilton Palace as: 'An Inlaid Buhl Chest of 2 Drawers with enriched metal ornaments & Marble Top'. It was acquired by the 10th Duke of Hamilton (1767-1852) between February 1835 and November 1840. Its provenance before that is unknown. This commode played a central role in the copies of the so-called 'Trianon commodes' made in the second half of the 19th century. Indeed, the present commode then in the Hamilton collection was lent to the Gore House exhibition 'Specimens of Cabinet Work' in 1853. On this occasion, the 4th Marquess of Hertford (1800-1870), creator of the Wallace Collection, had seven copies made of French masterpieces on show including the present commode. Hertford refers to it in his correspondence as 'the Duke of Hamilton's Commode' and had it reproduced as a pair signed by William Blake (now in the Frick Collection, New-York). The pair made for Louis XIV at Trianon was famous in the 19th century, also known as the 'commodes Mazarine' as they had been moved to the Bibliothèque Mazarine in Paris following the French Revolution. They were not easily accessible and it seems that the 19th century copies by well-known Parisian cabinet makers such as Fourdinois, Dasson or Zwiener were all made after the master-models created from the Hamilton/Petworth commode during the Gore House exhibition. Probably the most important piece of Boulle furniture in a National Trust House, it was not the only purchase made by the 2nd Lord Leconfield from the Hamilton Palace Sale. There was also a bureau plat and two clocks inlaid with Boulle marquetry (but not by Boulle) and a set of Louis XV chairs. Peter Hughes suggests the influential role that Lord Leconfield's wife, Lady Constance Primrose, might have played in the acquisition of such a group of French 18th century furniture. She was the sister of Lord Rosebery who had married Hannah de Rothschild in 1878 and inherited the French furniture collection at Mentmore Towers. Camille Mestdagh (2016)

Collection of the 10th Duke of Hamilton (1767-1852), Hamilton Palace, probably acquired between 1835-1840 By descent to the 12th Duke of Hamilton, sold by Christie’s in London at the Hamilton Palace sale (lot 994) Purchased at the sale by the dealer Colnaghi from which acquired by the 2nd Lord Leconfield (1830-1901) for Petworth. By descent, until the death in 1952 of the 3rd Baron Leconfield, who had given Petworth to the National Trust in 1947, and whose nephew and heir, John Wyndham, 6th Baron Leconfield and 1st Lord Egremont (1920-72) arranged for the acceptance of the major portion of the collections at Petworth in lieu of death duties (the first ever such arrangement) in 1956 by H.M.Treasury.