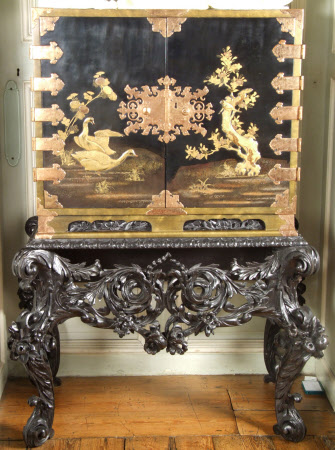 A Japanese black and gold lacquer cabinet on stand, circa 1675, opening with a pair of doors decorated with a tree to the right hand door and two geese to the left, the interior is fitted with ten lacquered drawers with aventurine to the inside and following a characteristic arrangement, mounted with engraved brass hinges and lock-plate, the top and sides with plain black lacquer panels. This Japanese cabinet forms a near pair with (NT 485442.1) on a similar stand. The present cabinet is raised on an Anglo-Dutch ebonised stand, carved with acanthus leaves foliage, flowers and fruits, on double-scroll legs terminated by scroll-out feet. This type of carved stand surmounted by a foliate frieze, ebonised or gilded, is characteristic of the time. The present stand is nearly identical to another example at Petworth House, supporting a Coromandel lacquer cabinet (NT 483459.2). Possibly acquired by the Duchess of Somerset (1667-1722) as she is known to have purchased Japanese and Chinese lacquer artefacts. In 1695 Mrs Harrison (who also supplied Queen Mary) was pais £52 for "a jappan cabinet and frame". In the 1750 Petworth House inventory following the death of the 6th Duke of Somerset (1662-1748), a few Oriental lacquer cabinets were recorded.

Possibly purchased by Elizabeth Percy, Duchess of Somerset (1667-1722). By descent, until the death in 1952 of the 3rd Lord Leconfield, who had given Petworth to the National Trust in 1947, and whose nephew and heir, John Wyndham, 6th Lord Leconfield and 1st Lord Egremont (1920-72) arranged for the acceptance of the major portion of the collections at Petworth in lieu of death duties (the first ever such arrangement) in 1956 by H.M.Treasury.