An Imaginary Church or Cathedral Interior, with possibly a Biblical Scene 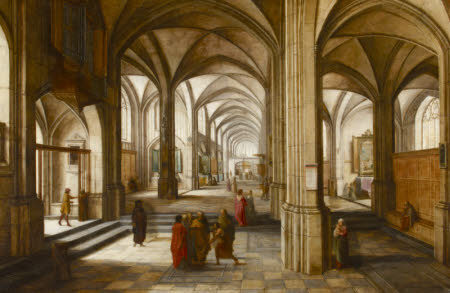 Oil painting on panel, An Imaginary Church or Cathedral Interior, with possibly a Biblical Scene by Hendrick van Steenwijck the younger (Antwerp c.1580 - Leyden 1649), signed on base of foreground pillar: HENRI / VAN / STEINWICK / 1621. An interior view by of a cathedral showing the aisle in vista down centre; on the left-hand side is a man entering through the porch up two steps; at centre are five men (one of whom looks like St Peter in yellow and blue) in long robes and a half-naked beggar; to the right is a mother carrying a baby, and a man seated in a stall. There are chapels to the right and left of the aisle. The nave in a vista down the centre; left, a man entering through the porch up two steps, and a man raising a tombstone; centre, five men in long robes (possiblt the Apostles) and a half-naked beggar reaching under the robe of the Saint Peter-like figure; right, a mother carrying a baby, and a man seated on a stall. The porch and a chapel open off the left of the nave, with further chapels between the buttresses beyond; on the right, further chapels open off an aisle. There is a triptych in the nearest chapel on the left, with only its wings visible; another is seen in the nearest chapel on the right, with a painting of the Holy Family in a doorway, watched and sketched by two Franciscan friars in the centre.

Possibly acquired by the 10th Earl of Northumberland from the Duke of Buckingham's collection at York House as the painting referred to as the 'rare Prospective done by Stenwick, the Figures by Pullenburke'. This was the picture with the highest valuation at Petworth (£100.00) and Symonds reported having seen it at Northumberland House in 1652; on loan to Lord Egremont at his London house 62 Chester Square, 1964/5; the Saftleven allegorical picture of the death of Charles I was exchanged with Lord Egremont in 1966 for a picture by Steenwyck entitled Interior of a Cathedral; on loan from the Egremont Private Collection