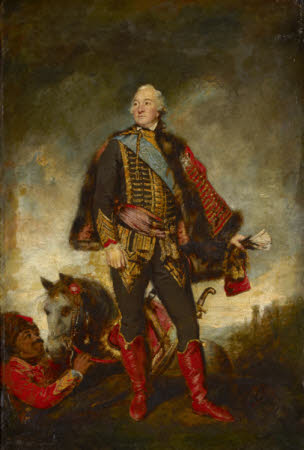 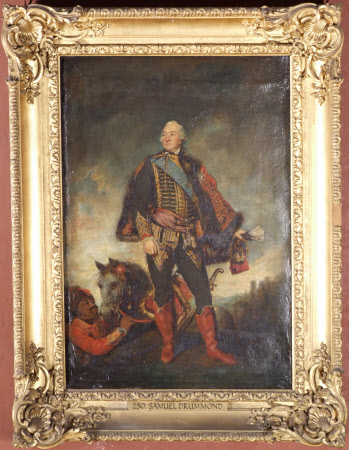 Oil painting on wood, Louis-Philippe-Joseph, Duke of Orleans 'Philippe Egalité' (1747-1793) (after Sir Joshua Reynolds) by Samuel Drummond, RA (London 1765 – London 1844). 1785. Full-length portrait, standing, turned slightly to the right, gazing to the left, bare headed, and wearing a black hussar uniform, gold laced; scarlet pelisse with a blue ribbon across his breast, an order on his pelisse and red leather boots; his shako is in his left hand. Below, left, an unidentified groom and horse against a background of sky and a low horizon. Samuel Drummond (1765-1844) was born in London and studied at the Royal Academy. 'Philippe Egalité', (1747-1793) Duc d'Orleans 1785, was the son of Louis-Philippe, Duc d'Orleans and Henriette de Bourbon-Conti and the father of Louis Philippe (1773-1850). King of France from 1830-1848; notoriously debauched, and hoping for the crown of France he espoused the revolutionary cause and adopted the nickname of 'Philippe Egalité' in 1792 when all hereditary titles were swept away. He became 20th Deputy for Paris to the Convention and voted for the death of Louis XIV. He dreamed of becoming a constitutional king of France, or at least regent, but was eventually arrested and after six months was found guilty of conspiracy and guillotined in 1793. This painting is a small copy of Reynolds' life size picture painted in 1785 and given to the Prince of Wales, subsequently burned at Carlton House (Royal Collection Trust, RCIN 404555).

In the collection of the 3rd Earl of Egremont (1751-1837) by 1835 thence by descent; on loan from the Egremont Private Collection