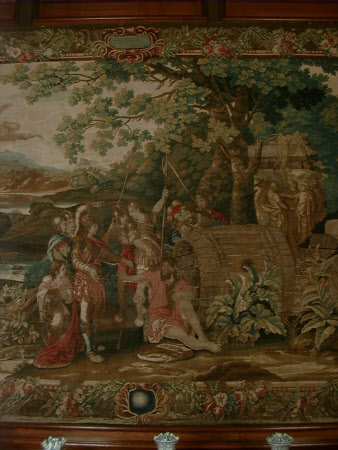 Tapestry, wool and silk, 7½ warps per cm, Alexander Visiting Diogenes from a set of two of The Life of Diogenes, English, possibly Mortlake, c. 1680-1690. In the centre of the tapestry Diogenes sits by the barrel that was his home, gesturing with one arm to Alexander who approaches with a group of soldiers and attendants. Alexander had visited the philosopher and said he would grant him any favour, to which Diogenes replied 'get out of my light' (Diogenes Laertius 1925, 6.38). The setting is a landscape, with a river to the left and ruined buildings and columns to the right. There are borders on all four sides of the tapestry composed of scrolling stone forms with garlands of flowers arranged over them, and blue cartouches at the centre top and bottom. An additional border has been attached on the left hand side. A maker's mark in the form of a white shield with a red cross appears on the outer edge of the lower border, at the right hand side.

The philosopher Diogenes of Sinope (412/403–324/321 BC) was considered, along with Antisthenes, the founder of Cynicism. His nickname ‘Cynic’, literally ‘doglike’, reflects the highly unconventional lifestyle he lived and advocated. Diogenes re-evaluating mankind’s relation to both nature and civilization, and redefined the individual’s freedom and self-sufficiency. None of Diogenes's written works survives, but he quickly became an established literary figure and numerous anecdotes arose relating to his eccentricities. The two tapestries at Dyrham come from a series of seven scenes from the life of Diogenes, with the subjects 'Plato's Academy', 'Diogenes in Meditation', 'Diogenes Beside his Barrel', 'Diogenes Washing Plants', 'Diogenes Discarding his Cup', 'Diogenes Writing on the Wall' and 'Alexander Visiting Diogenes'. The subjects were taken from Diogenes Laertius's 'The Lives of the Philosophers', written in the 3rd century AD and the main source for Diogenes's life. The text was published in Latin in London in 1664 (See Diogenes Laertius 1925). The designs for four of the tapestries, and their Latin inscriptions, derive from etchings by Salvator Rosa published in 1662, and the other three designs were composed by an unknown artist in Rosa's style (Hefford 2010, p. 240). The 'Diogenes' tapestries were made at Mortlake and/or smaller London workshops at the end of the seventeenth century. The Dyrham tapestries are not signed but other examples survive with the maker's mark of a red cross on a white shield, first used at Mortlake from 1619 but was adopted by other tapestry workshops in the London area after 1660. A fragment at Llanerchaeron from a tapestry of 'Diogenes Discarding his Cup', with the same border as the Dyrham tapestries, bears the red cross mark in conjunction with the initials IR, which may stand for Jan Rosset, who worked at Mortlake, or possibly John Ridges, an upholsterer active in London in the 1670s and 1680s (Hefford, 1985; Hefford 2010, p. 240; Hefford 2002, p. 55). The tapestries can be definitely dated to after 1662 when Salvator Rosa's etchings were published. With their extensive, elegaic landscapes they are closer in spirit to tapestry designs of the 1670s onwards. The earliest record of the series comes in 1683 when a set of 'Dioguines hangings' was bought for Charles II, although the details of the purchase have been lost. 'Five pieces of tapestry hangings of the Story of Diogenes' were repaired for the crown by the Yeoman Arrasworker, John Vanderbank, in 1692, and in 1696 Vanderbank relined five pieces. In March of that year six Diogenes tapestries, 11 feet high, were in the Standing Wardrobe at St James's Palace. These records probably relate to a set of five that survive in the Royal Collection at Holyroodhouse. The original lining of one of these panels is marked '6:ps 11 FOOT DIOGENES', and the reverse of another bears the crowned 'IR' stamp used by King James II (r. 1685-1688), indicating that the set entered the royal collection before or during his reign (Swain 1988, pp. 12-16). Numerous sets and partial sets of 'Diogenes' tapestries survive including, within the National Trust's collections, a set of four which has seen significant alteration to fit the walls of the Tapestry Room at Belton House, Lincolnshire (no. 437003), a single panel of 'Plato's Academy' in the Chapel at Chirk Castle, Wrexham (no. 1171322), and a fragment, mentioned above, from 'Diogenes Discarding his Cup' at Llanerchaeron, Ceredigion (no. 548684). The purchase of the tapestries, presumably by William Blathwayt (?1649-1717), the builder of Dyrham, is not recorded. '2 Pieces of Diogenes Hangings' were listed in the 'Anteroom below Stairs' in inventories of Dyrham in 1703 and 1710 (GRO D1799 E254 / DL.16) (GRO DLT.1 / DL.17). By 1742 the room had been rechristened the 'Diogenes Room' and the inventory of that year records 'some Tapestree hangings' in the room (GRO DL.19 / D1799 E256). Inventories of 1839 and 1844 record the tapestries in the same location. The tapestries may have been moved at some point, as they have both been altered in size by the addition of extra borders. (Helen Wyld, 2012)

Indigenous collection recorded at Dyrham in 1703; thence by descent; purchased by the Ministry of Works through the National Land Fund and transferred to the National Trust in 1956 and given to Dyrham Park in 1961