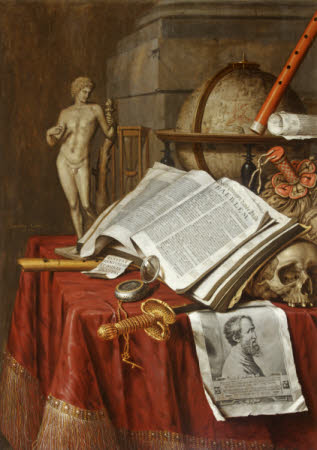 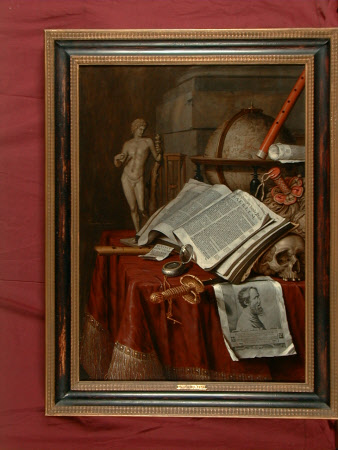 This elaborate still life is a ‘vanitas’ painting, a reminder of the fragility of life and worldly concerns, and of the inevitability of death. Among the objects on the table are musical instruments, a celestial globe, a watch, and a sword. A statuette stands near the back, and a print with a portrait of Michelangelo hangs down from the table. The book, open on a page describing the Dutch town of Haarlem, is propped up on a skull, which, together with the hourglass in the background, is a reminder of mortality. This painting is at home among the Dutch and Flemish paintings at Dyrham Park, but does not form part of the property’s historic collection. It was, instead, bequeathed to the National Trust by the art historian and antiquarian Dame Joan Evans (1893–1977), and is displayed at Dyrham because of the suitability of its style and subject matter.

Oil painting on panel, Vanitas Still Life with a Statuette of an Antique Athlete and a Print of Michelangelo, by Edwaert Collier (Breda c.1640 - Leyden c.1707), signed mid-left: Edwaerdus Colier / f 1675. A range of objects displayed on a table covered in red, gold-fringed cloth, with the stone base of a column in the right background. Most prominent on the table is an open printed book, with the inscription "Beschrijvinggen van de Stadt / HAERLEM" visible on the recto. The book rests on a skull to the right. A red recorder, or handfluyt, and a roll of paper, on which there are no legible inscriptions, rest on the stand of a celestial globe in the background, the sign of cancer most prominently visible. To the left of the book is a statuette of an antique athlete, with a torch in his left hand and another object in his right. Between the statuette and the globe is an hour glass. On the table in front of the book is another wind instrument, a sword, an open pocket watch on a chain, a slip of paper bearing the inscription VANITAS / VANITATUM / ET OMNIA / VANITAS, and a print with a portrait of Michelangelo hanging over the edge of the table.