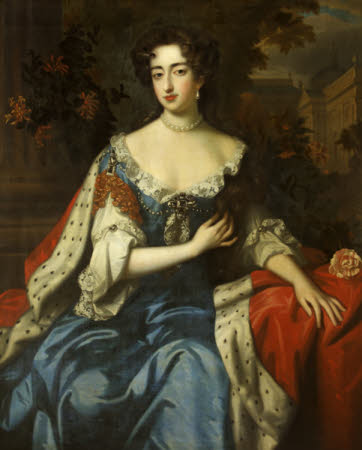 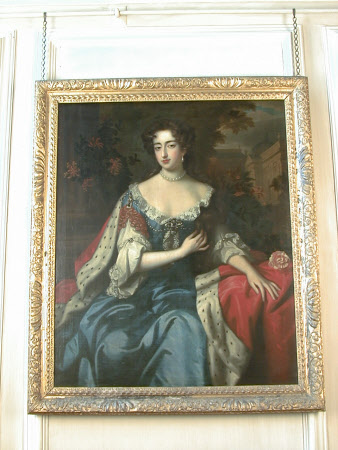 This is a version of the original portrait of Princess Mary by Willem Wissing in the Royal Collection, painted in the Netherlands in 1685. It was commissioned in the same year that Mary's father, James, Duke of York, ascended to the throne of England as James II, following the death of his brother, Charles II. Just four years later Mary and her husband, William of Orange, were jointly crowned King William III and Queen Mary, after the ‘Glorious Revolution’ had deposed her father. She is shown here in robes of state with a palace, perhaps Honselaarsdijk, in the background. A rose lies by her outstretched left hand (while a crown and sceptre are placed here in other versions of the portrait), and honeysuckle flanks her on either side.

Oil painting on canvas, Queen Mary II (1662-1694), when Princess of Orange, after, or studio of Willem Wissing (Amsterdam 1656 - Burghley House 1687), after an original of 1685. A three-quarter-length portrait, seated, facing the viewer, wearing a blue dress and red cloak lined with ermine. A pink rose lies near the sitter's left hand, and honeysuckle can be seen behind her. In the background is the view of a palace.