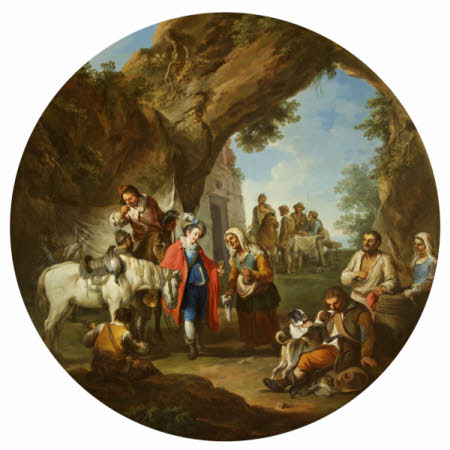 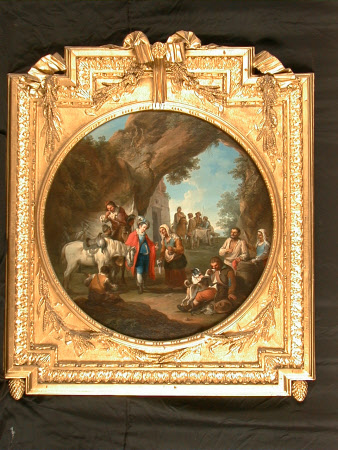 Oil painting on canvas, Two Sportsmen being offered Refreshment, by Paolo Monaldi (1720-1799), mid 18th century. A circular painting of two horsemen in the foreground being offered refreshment by an old woman. Two groups of peasants rest nearby, outside a cottage.

A Catalogue Of the Valuable Collection of Pictures of William Blathwayte, Esq. Which will be sold by Auction at Derham, in the County of Gloucester, on Monday the 18th of November Inst. and the three following Days [...] Thomas Joye, Auctioneer [1765], first day, 18 November 1765, lot 30, or lot 31 Inventory and valuation of all the household furniture, linen, china, glass, books, pictures [...] the property of William Blathwayt Esqr. at his late residence Dyrham Park [...] March 1839. [March 1839]., in the Cedar Drawing Room Dyrham Park 1844 List of Valuable Pictures, Prints, &c at Dyrham House, Gloucestershire the Property of Geo: Wm. Blathwayt Esq. with nominal prices affixed to some for the purposes of Insurance only. [1844], in the Cedar Drawing Room, no.102 Inventory [of] Household Furniture, China, Glass, Oil Paintings, Engravings, Books, Silver Plate [...] In the Mansion House at Dyrham Park Gloucestershire bequeathed as Heirlooms by the late Colonel George William Blathwayt who died May the 14th 1871, in the Cedar Drawing Room Dyrham Park 1937 An Inventory and Valuation of the contents of Dyrham Park, Gloucestershire, the property of the late R. W. Blathwayt, Esq., made for the purpose of Probate duty by, Puttick & Simpson [...] January 1st 1937, ? in the White Drawing Room