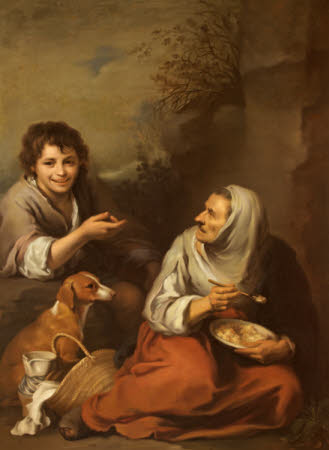 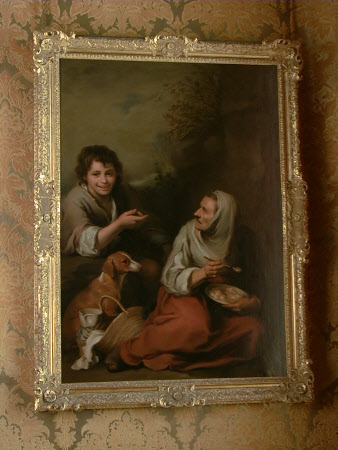 According to family tradition, this copy of Murillo’s Urchin mocking an Old Woman eating Migas was painted by Thomas Gainsborough (1727–1788). This is now thought to be unlikely. What we do know is that it appears to be an eighteenth-century copy of Murillo’s original painting of the same subject, probably not the original which is still at Dyrham Park, but a slightly different version of the same painting in another English collection (either the Wellington collection at Stratfield Saye, or the Spencer collection at Althorp). The Dyrham original was sold at auction in 1765, but was bought by another member of the Blathwayt family and returned to Dyrham at a later date. This eighteenth-century copy was probably acquired as a substitute for the original, before it was returned to the property. Both the original Murillo and the copy now hang alongside each other at Dyrham Park.

Oil painting on canvas, An Urchin mocking an Old Woman eating Migas, after Bartolomé Esteban Murillo (Seville 1617 - Seville 1682), 18th century. An old peasant woman, dressed in a long red skirt and a grubby white shawl, drawn over her head, is seated on the ground at the right. She holds a bowl of migas in her left hand and a spoon in her right, and appears to be guarding the migas for herself. On the left is a dog, sitting by a basket and a jug, and behind the dog is a young peasant boy, who looks out at the viewer and points towards the old woman with his right hand, resting his elbow on a stone. Behind them in the background are rocks and trees.