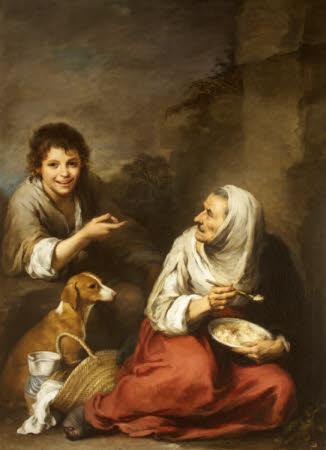 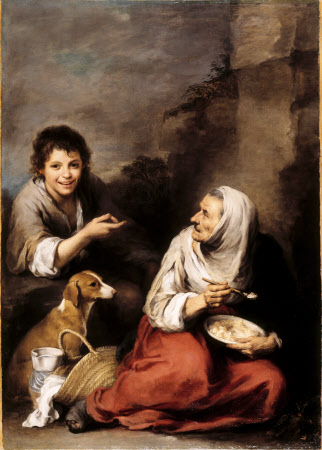 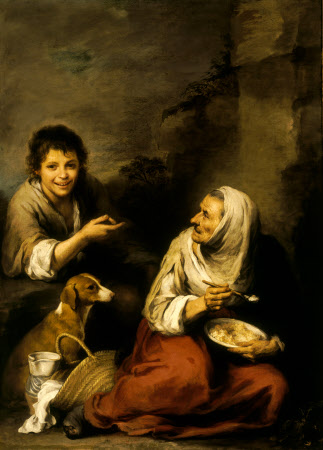 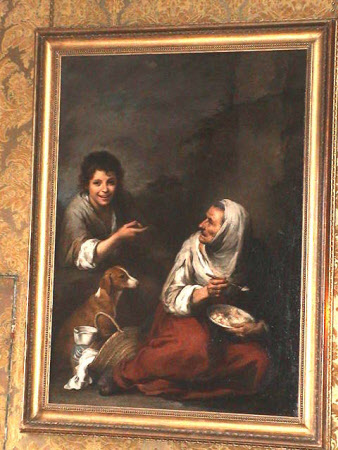 This scene shows an old woman eating a simple meal of migas (a dish made of leftover bread) while being mocked or teased by a laughing boy. It leaves us with questions about the relationship between young and old people and poverty and dignity. The boy looks out to the viewer, gesturing towards the woman, almost as if to ridicule old age itself. The scene is both emotive and uncomfortable. As the viewer, do we look away, side with the young boy, or pity the woman? The Spanish artist Bartolomé Esteban Murillo (1617–82) was a master of expressive everyday scenes that also captured the pathos of personal hardship. Murillo’s work is today often seen as sentimental but was popular across Europe and helped to demonstrate that painting – like poetry and literature – could provoke powerful emotions. The picture was probably purchased in the late 17th century from the Netherlands and brought to Dyrham Park by William Blathwayt (?1649–1717), who commissioned the building of the 17th-century house.

Oil painting on canvas, An Urchin mocking an Old Woman eating migas, by Bartolomé Esteban Murillo (Seville 1617 - Seville 1682), circa 1660-65. A seated elderly woman guarding her dish of migas from a young boy, who looks directly at the viewer as he points to the woman and grins, his elbow resting on a rock. She turns to look at the boy, who appears to be mocking her. Impoverished, the woman is dressed in a grubby white shawl wrapped around the head, a white chemise, red skirt and worn brown boots. At her feet is a straw basket and glazed ceramic jug. The boy is described as a street urchin and has brown wavy hair, a white chemise and taupe-coloured jacket. Between them sits a small dog gazing hungrily at the dish of migas. The scene takes place on a dirt ground, at the foot of a rock or wall, with trees in the background.

Murillo's paintings of urchins and beggar-boys had no real native, and few foreign, precursors, and form just a small part of his substantial oeuvre (Angulo Iñiguez 1981, vol.I, pp.203-4 & 441-57 and Angulo Iñiguez in Bartolomé Esteban Murillo 1983, p.26). Yet before the Peninsular War (1807-14) brought large numbers of his works on the market in the early 19th century, they and his Madonnas were the subjects by which he was best known in northern Europe. Indeed, they seem to have been originally painted almost entirely for a foreign clientele (Palomino transl. Mallory 1987, pp.280-86). The earliest of these pictures, the 'Street Urchin looking for a Flea' (Louvre, Paris, inv.no. 933), is generally dated to around 1645-50 (Angulo Iñiguez 1981, no.390; vol. II, pp.303-4; vol. III, col.pl. 428). As the subject (a boy delousing himself) indicates, Murillo began by depicting the street children of his native Seville with an unblinking naturalism, employing a sombre palette and strong chiaroscuro. The main group, to which the present picture belongs, was executed between about 1660 and 1680. In these pictures, the mood is generally more cheerful, with smiling boys eating or playing dice. The compositions usually consist of two or three figures, often arranged in a pyramidal form and contrasted with a dog, a wicker or straw basket, and an earthenware water jug. This picture is unusual in that it combines a boy with an adult, and that the boy directly addresses the viewer. This may suggest that it was intended to exemplify a Spanish proverb. It is also the only composition of which there is a second - either autograph or studio - version (Wallraf-Richartz Museum, Cologne, inv.no. 2541; Klesse 1973, pp. 89-91, pl. 84; Angulo Iñiguez 1981, vol. II, p. 309, as possible studio replica). As Angulo Iñiguez has argued, these pictures were probably commissioned by Netherlandish merchants doubling as picture dealers and collectors. Key figures were Nicolàs Omazur (1609-1691 or after), an Antwerp silk-merchant and poet who was painted by Murillo (Museo del Prado, inv.no. P003060), was left two small pictures in the artist’s will, and owned his Self-Portrait (National Gallery, London, NG6153) and Josua van Belle (circa 1635-1710), a Rotterdam merchant trading in Seville, whose portrait was also painted by Murillo (National Gallery of Ireland, Dublin, NGI.30). Versions of Murillo's urchin pictures reached Britain via Flanders at an early date. At Dunster Castle in Somerset and Kingston Lacy in Dorset (NT 726065 and NT 1257134), there are copies of the Two Urchins eating Melon and Grapes (Alte Pinakothek, Munich, inv.no. 605) that, with a greater or lesser degree of certainty, date to the 17th century. But how did this picture come to Dyrham? In 1693 William I Blathwayt (1649-1717) bought eighteen itemised pictures, some Antwerp-related, from the painter Jan Siberechts (Dyrham archives, Gloucester Record Office). The Murillo was not among them, but he might have acquired it in another transaction from the same source. Alternatively, he may have obtained it by purchase or bequest from his uncle, the connoisseur and collector Thomas Povey (1613/14-circa 1705), who, on 8 November 1693, sold his nephew £500-worth of books and pictures, mostly family portraits and 'small peeces' (Dyrham archives, Gloucester Record Office, D1799/E247). Perhaps significantly in this context, during his active years Povey was involved in colonial trade and was then and afterwards known for his collections and stylish way of living. The picture was included in the third day of a sale held at Dyrham on 18-21 November 1765, which had been forced on William III Blathwayt (1719-87) by his creditors (sale catalogue British Library, S.C.1360). His younger brother, General Wynter Blathwayt (1729-1806), appears to have bought it, so that it remained in the family, if not the house. Two other pictures of similar subjects ascribed to Murillo made a more permanent departure from Dyrham at this sale, as lots 16 and 33: 'Two Boys and a Black Boy, by Murelli' and 'Two Boys and a Fox, by Murelli'. These must have been the earlier replicas or copies of the two pictures now in the Dulwich Picture Gallery, which have themselves been in England since at least the 17th century. The copy of the present painting, also at Dyrham (NT 453755), was probably made from the variant now in the Wallraf-Richartz Museum in Cologne (Davies 1819, pp. xciv, n. 97) or from the copy of that painting in turn, belonging to the Duke of Wellington (Stratfield Saye).

Thought to have been acquired by William Blathwayt (?1649-1717), either by purchase or bequest from Thomas Povey, or by purchase from Jan Siberechts; sold on the third day of the Dyrham Park sale, 18-21 November 1765, lot 34, possibly to General Wynter Blathwayt (1729-1806), by whom it is thought to have been left to Lt-Col George William Blathwayt (1797-1871); thence by descent; Purchased by the Ministry of Works, along with the house, contents and garden, from Mr J. R. W. Blathwayt in 1956, and transferred to the National Trust in 1961.