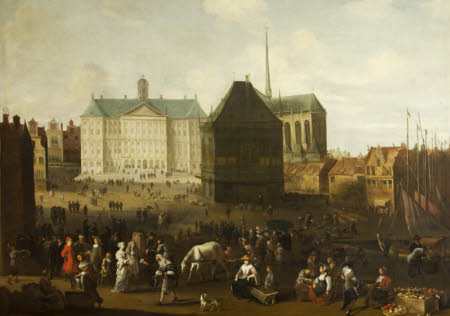 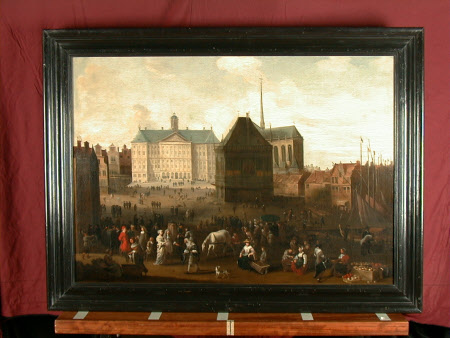 Bathed in sunlight at the far side of Amsterdam’s central square is the city’s Town Hall, which has since been converted into the Koninklijk Paleis. Designed by the Dutch architect Jacob van Campen (1595–1657), it was built between 1648 and 1655. To the right is the sixteenth-century Nieuwe Kerk, or New Church, partly obscured by the Weigh-House, cast in shadow, which was later torn down. This painting is first recorded at Dyrham Park in 1765, when it was put up for sale, but it may have been purchased in the late seventeenth or early eighteenth century by William I Blathwayt (?1649–1717), who established the collection of Dutch pictures at Dyrham Park.

Oil painting on canvas, The Dam, Amsterdam, by Hendrik Mommers (Haarlem 1623 – Amsterdam 1693). A view of The Dam, the town square in Amsterdam, with the Town Hall (later converted into the Koninklijk Paleis) bathed in sunlight in the background. To the right stands the 16th-century Nieuwe Kerk, or New Church, which is partly obscured by the Weigh House, cast in shadow. In the foreground are groups of figures, going about their daily business.

Recorded at Dyrham Park since at least 1765, when put up for sale by William III Blathwayt (1719-1787) along with other pictures from Dyrham, third day of the sale, lot 15; subsequently returned to Dyrham Park; thence by descent; purchased by Colnaghi for the National Trust from the sale of paintings from Dyrham Park at Sotheby's, 29 February 1956, lot 6

A Catalogue Of the Valuable Collection of Pictures of William Blathwayte, Esq. Which will be sold by Auction at Derham, in the County of Gloucester, on Monday the 18th of November Inst. and the three following Days [...] Thomas Joye, Auctioneer [1765], third day of the sale, 20 November 1765, lot 15 Dyrham Park 1844 List of Valuable Pictures, Prints, &c at Dyrham House, Gloucestershire the Property of Geo: Wm. Blathwayt Esq. with nominal prices affixed to some for the purposes of Insurance only. [1844], no.84, in the Billiard Room Catalogue of Old Master paintings the property of J. R. W. Blathwayt, Esq. [1956]., lot 6 Treasures from the National Trust: An Exhibition of Items from National Trust Houses in Wales and the Borders (exh cat) Glynn Vivian Art Gallery, Swansea, 9 October - 6 November 6th, 1971 Scholars of Nature: The Collecting of Dutch Paintings in Britain 1610-1857, (ed. Christopher Brown), exh. cat., Ferens Art Gallery, Hull, 1981, no.10