A View through a House 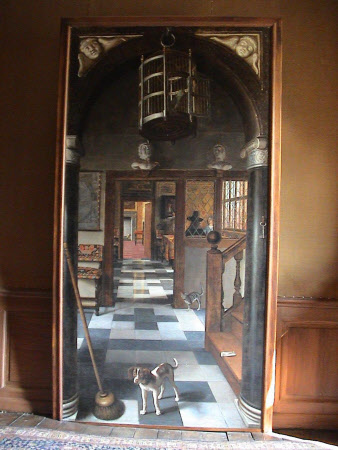 As we walk towards this picture, we are intrigued to see an unexpected corridor in front of us. The scene is tantalising, but we can go no further. The corridor is an illusion, a clever trick of perspective, and it soon becomes clear that we are looking at a painted surface. The diarist Samuel Pepys (1633–1703), who saw this picture in January 1663 in the ‘low parlour’ of the London house belonging to the courtier and collector Thomas Povey (1613/14–c.1705), wrote that ‘above all things, I do most admire his piece of perspective especially’. The painting is full of realistic details, from the inquisitive dog and the alarmed cat to the rooms beyond, where two men and a woman are seated at a table, possibly negotiating a marriage. Painted by the Dutch artist Samuel van Hoogstraten (1627–78), a master of perspective who had been a pupil of Rembrandt, it is considered one of his most accomplished pictures. Its owner Thomas Povey was the uncle of William Blathwayt (1649–1717), who built Dyrham Park in the 1690s, and the picture was probably on display there shortly after the house was completed.

Oil painting on canvas, A View through a House, by Samuel van Hoogstraten (Dordrecht 1627 – Dordrecht 1678), signed and dated S. V. Hoogstrat... 1662, and dated 1662 on the map. A perspective view through a classical archway, above which hangs a birdcage, into a staircase hall and a succession of rooms. A dog stands in the foreground, and a cat by the doorway into the room beyond the staircase hall. Two men and a woman can be seen seated around a table in the second room, and one of the men is reflected in a mirror on the opposite wall.

The painterly technique of illusionism reached new heights in 17th-century Holland where artists like Samuel van Hoogstraten experimented with the effects of trompe l’oeil, a French phrase meaning to ‘deceive the eye’. Hoogstraten excelled in creating optically seductive views that blurred the distinction between appearance and reality, flatness and depth, truth and artifice, transience and permanence. Samuel van Hoogstraten was one of Rembrandt’s most successful pupils and his interest in optical illusions, demonstrated by his celebrated Peepshow in the National Gallery, London, attracted the interest of contemporary natural scientists (NG3832). His accomplished trompe l’oeil still lifes have also been called ‘threshold’ paintings. These works seemingly confound the limits of representation by tricking the eye into ‘seeing’ beyond the threshold of the image to artificial views and objects that do not actually exist. This large-scale painting at Dyrham Park, more than 2 meters tall, is one of the most arresting of Hoogstraten’s threshold pictures. It offers a view through a classical archway, above which hangs a birdcage, into a staircase hall and a succession of rooms. The door of the cage has been left open and a parrot perches on the threshold of the cage, much like we are perched on the threshold between the ‘real’ world and Hoogstraten’s painting. Indeed, each of the animals in the picture – parrot, dog and cat – seem more startled to see us than we them. The picture was painted in London for Thomas Povey (1613/14–c.1705) in 1662. On first seeing it at Povey’s townhouse, the diarist Samuel Pepys noted, ‘...he after dinner showed me, from room to room, so beset with delicate pictures, and above all a piece of Perspective in his closett in the low parler’ (19 January 1663). On a return visit Pepys wrote again of the painting, ‘…above all things, I do the most admire his piece of perspective especially, he opening me the closet door and there I saw that there is nothing but only a plain picture hung upon the wall.’ Povey sold the painting to his nephew William I Blathwayt (1649–1717), who filled Dyrham with Dutch pictures and decorative art. Today the painting hangs at the end of a corridor at Dyrham, drawing the eye through a succession of rooms to give the illusion that the space is much longer than it really is.