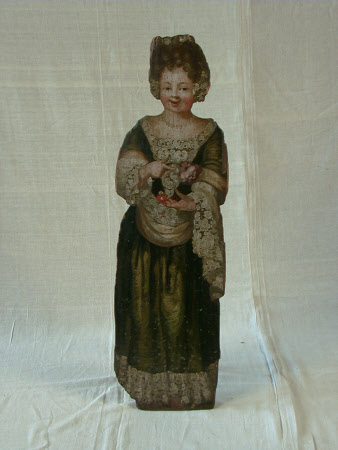 Like the dummy board, or ‘silent companion’ of a woman peeling an apple in the West Hall at Dyrham Park, this little figure may once have been used as a firescreen, or have simply been displayed in a domestic interior. It shows a young, rosy-cheeked and well-dressed girl, holding flowers, and smiling out at the viewer. Unlike the dummy board of the woman peeling an apple, this figure is not part of the historic collection at Dyrham Park, but was given to the National Trust in 1961.

Oil painting on wood, A Dummy Board Figure of a Little Girl carrying a Bunch of Flowers, Anglo-Dutch School, circa 1690-1700.

Left to the National Trust by Miss Hawley, the Cleveland Hotel, Bath, 1961.