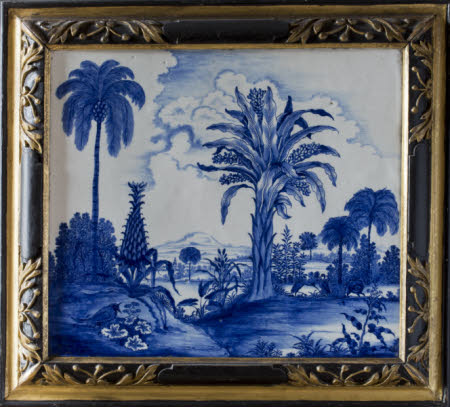 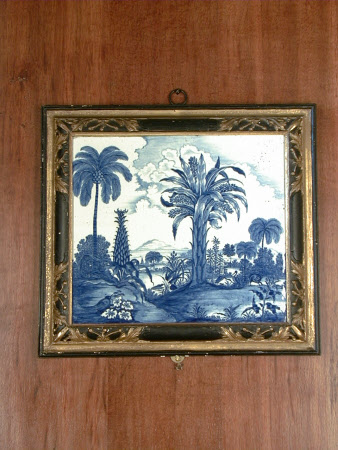 William Blathwayt could justifiably be described as a 17th century ‘Hollandophile’. Dyrham Park, his country seat in Gloucestershire, is essentially a Dutch house and the garden was laid out in the fashionable Dutch baroque style. Blathwayt even spoke the language, which was useful for a man who served as minister to the Dutch King of England, William III. It also came in very handy in his negotiations for the many objects he purchased whilst travelling with the King on official royal duties in the Netherlands. Dyrham Park was completely renovated between 1692 and 1704, giving Blathwayt the opportunity to display his many Dutch acquisitions, including paintings and prints and his fabulous collection of Delft ‘blue and white’ ceramics. The colours were in imitation of the fine and highly prized Chinese porcelain imported into Europe during this time. This unusually large Delft plaque, one of a pair, also introduces another Asian motif. Inspired by the Dutch East India Company’s expedition to China, it is decorated with exotic banana, pineapple and date palms, along with a crane and pagoda in the background. The image was copied from a plate in a book about China by Johan Nieuhof, published in Amsterdam in 1665. It also perfectly illustrates the cross cultural influences that characterised European art and design during this period. In this case, it provided a Dutch view on China within an English historic house.

Tile - One of a pair of Delft blue and white tiles, of exotic scene, with banana, palm and pineapple trees and cranes, a pagoda in the distance; in contemporary English frame, carved with acanthus leaves and berries, black and gilt. c. 1660. Decoration after engraving in Nieuhof. Pair to DYR.C.96. 1660 - 1685

Indigenous collection purchased by Ministry of Works in 1956 and given to Dyrham Park in 1961.