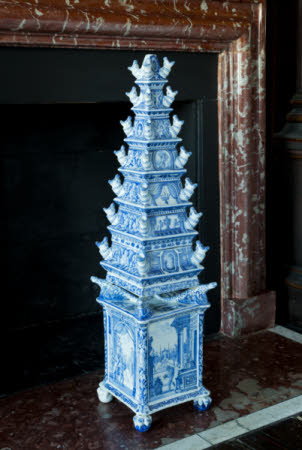 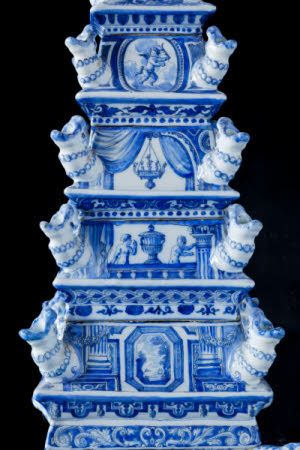 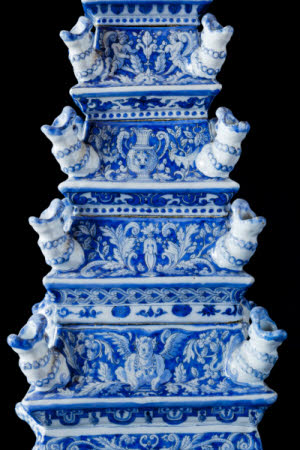 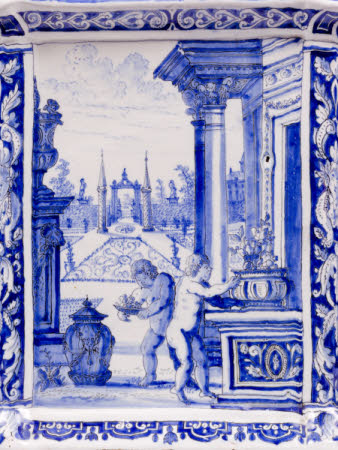 Made to astonish and impress, this delftware vase is one of a pair at Dyrham Park used to display tulips and other flowers. At the time of its manufacture, exotic flowering plants were costly, so each bloom had to be displayed to maximum effect. Flower paintings of this period feature both wild and cultivated flowers such as the violet, poppy, peony, iris, rose, carnation and honeysuckle. With this vase, each spout could display a single stem – as specimens of nature’s wonders. The seven tiers each contained water to keep the flowers fresh and beautiful. The owner of Dyrham Park, William Blathwayt (?1649–1717), worked for the Anglo-Dutch court of King William III (1650–1702) and Queen Mary II (1662–94), and similar vases were known to have been acquired by the queen, who was a passionate collector of delftware. An inventory of the house from 1710 shows that these impressive vases were placed in front of empty fireplaces to create a cheerful focal point to brighten the rooms.

A De Grieksche A (Greek A) factory tin-glazed earthenware (faience) seven-tiered flower pyramid, painted in cobalt blue and manganese black with garden scenes, made at the workshop of Adrianus Kocx, Delft, the Netherlands, c.1690-95.

Aspiring courtiers used ceramics as evidence of their loyalty to William III and Mary II. As a result, many extravagant examples of bespoke Dutch faience are found in historic English houses. They are painted to resemble Chinese porcelain imported through Holland, and their shapes, often associated with cut flowers or growing plants, duplicate the inventive models furnishing royal interiors in England and the Netherlands. In November 1710, an inventory was prepared of the rich contents of Dyrham Park, Gloucestershire, a house acquired by the skilled and ambitious court administrator William Blathwayt (c.1649–1717) by his marriage in 1686 to Mary Wynter (1650–91), heiress to the estate. It lists over a dozen Delft flowerpots placed inside empty chimneypieces. ‘A large Pyramid Delf Flower Pot in ye Chimney’ was strategically placed in the red and white marble chimneypiece in the main entrance, the Vestibule, which was hung with Dutch gilt leather panels. In the ‘Best Bed Chamber above Stairs’, lined with ‘verdure’ tapestries and furnished with a crimson and yellow silk bed and chairs, there was another Delft pyramid, also ‘in ye Chimney’, placed on the marble hearth-stone (‘foot-pace’) directly in front. Both Delft pyramids survive. Exquisitely painted in cobalt blue outlined with manganese black, they form a pair, as was usual, and were made at De Grieksche A factory between 1690 and 1695. Their square pedestals are supported on claw-and-ball feet surmounted with four salamanders supporting seven graduated trays. Each tray contained water for the flowers inserted through the tubular nozzles (in the form of a serpent’s open jaw). The pedestals have alternating scenes of Dutch formal gardens, derived from designs by court architect Daniel Marot (1661-1752), who worked with Kocx on royal commissions. In one, amorini arrange flowers in an urn, framed by classical architecture, and on the other, seen through an archway, they hold a flower-basket and garden pot. The pyramids were filled with a variety of brightly coloured flowers, a costly luxury changing with the seasons, enlivening dark baroque interiors. As they cannot be identified in a 1703 inventory of Dyrham, they may have been in Blathwayt’s house in Whitehall, London, or he may have acquired them later second-hand, since few were produced after Mary II died in 1694. Blathwayt made major improvements to the fabric of Dyrham following his wife’s death in 1691. Fashionable goods from around the world were acquired on trips to The Hague and Amsterdam, drawing on the taste of William and Mary and their merchants. Even his magnificent garden was in the royal taste, with parterres, fountains and sculpture. A polylinguist, Blathwayt had become wealthy in his own right through lucrative posts as Surveyor and Auditor-General of Plantation Revenues (1680–88), supervising incomes from the colonies. Later, having bought the office of Secretary of War, he administered all aspects of the army and frequently travelled with the King. However, with William’s death, he was pushed out of office and into retirement. No invoices survive detailing his Delft purchases, one of the most important collections in Britain. Some may have been perquisites from William III, distributed following Mary’s death, or from Queen Anne, following William’s death. In the nineteenth century, the Delft was gathered together with other heirlooms in the Great Hall. Many of the flower vases were separated from their pedestals, as they were no longer used for their original purpose. Catalogue entry adapted from Patricia F. Ferguson, Ceramics: 400 Years of British Collecting in 100 Masterpieces, Philip Wilson Publishers, 2016.