Boar Hunt in a Landscape 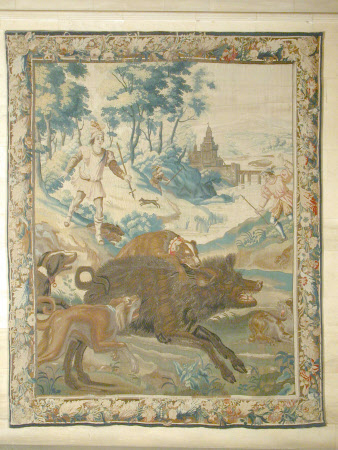 Tapestry, wool and silk, 7 ½ warps per cm, Boar Hunt in a Landscape, probably Flemish, c. 1660-1680. In the foreground two dogs attack a wild boar, while two young men holding spears watch from the landscape beyond. In the distance there is another huntsman with dogs, and to the right a bridge over a stream with a stone building nearby. The borders are composed of leaves and flowers punctuated by curling blue acanthus leaves on a brown ground, with rosettes in each corner.

Although grouped with the other six 'Hunts of Maximilien' tapestries at Upton, this tapestry is in fact from a different series. It is of a coarser weave than the others, has different borders, and its design is not taken from the sixteenth-century 'Hunts of Maximilien' series that provides the basis for four of the other six tapestry designs. Although the seven hunting tapestries at Upton Park were woven in the late seventeenth century, the designs of four of them are adapted from one of the most celebrated tapestry series of the sixteenth century, the so-called 'Hunts of Maximilian’ woven in Brussels between 1531 and 1533 and now in the Louvre in Paris. There are twelve scenes in the original 'Hunts of Maximilian' series, each representing the recreations of the court of Maximilian I, the Holy Roman Emperor, in a particular month of the year. The setting is the Forest of Soignes, the hunting ground of the Duchy of Brabant outside Brussels. Although the commission of the tapestries is not recorded, they were assuredly made for a member of the Austrian Habsburg dynasty who included Brabant among their dominions. The Ducal palace of Brussels, the seat of the Habsburgs in the Netherlands, is the setting for the last tapestry in the series, and a number of the figures in the tapestries appear to be portraits of the Habsburgs and their courtiers (Campbell 2002, pp. 329-38; Balis et al, 1990; Schneebalg-Perelman, 1982). The original 'Hunts of Maximilian' were almost certainly designed by Bernard van Orley (dates), the foremost tapestry designer in Brussels in the early part of the sixteenth century. A series of pen and ink drawings for the tapestries survive, also in the Louvre. The designs of four of the seven tapestries at Upton are based on the earlier 'Hunts of Maximilien', but significantly curtailed and simplified, isolating a single figure or group from one of the much larger original scenes. The borders on the Upton tapestries are also far simpler than those on the original series. Although displayed together today, the seven tapestries at Upton were not always part of a single set. Six of them are signed by late seventeenth-century Brussels entrepreneurs: three with the initials of Gerard Peemans (fl. c. 1660-1710), two with the initials of Jacques van der Borcht (fl. 1675) and one with the initials of Everaert III Leyniers (Brussels, 1597 – c. 1680). Only the tapestries signed by Peemans and Leyniers are based on the 'Hunts of Maximilien': the months of 'April', 'May', 'July' and August'. These four were almost certainly conceived as part of the same set as they have identical borders. The two panels signed by van der Borcht ('Boar Hunt in a Park' and 'Young Man with a Spear'), while in the same style as the other four and including figures in sixteenth-century dress, are not in fact based on the 'Hunts of Maximilien', and their borders are slightly different to the first four. They probably therefore come from a different set, although their height is roughly the same. The seventh tapestry, the 'Boar Hunt in a Landscape' which has lost its lower galloon and has no signatures, is very different is style and colouring from the other six tapestries, and has a coarser weave. Although this tapestry was probably woven at a similar date to the others it is not related to them. The largest set of the 'Hunts of Maximilian' from the late seventeenth century is an edition of six tapestries in the Château of Franc-Waret in Belgium, woven between 1665 and 1676 for Jacques de Groesbeeck and signed by Evraert Leyniers. Three tapestries, also signed by Leyniers, are in the Musée de Brou, Bourg-en-Bresse, and a set of six was until 1950 in the Château de Keriolet, Finistère (Delmarcel in Balis et al., 1993, p. 127). It was not only the Brussels tapestry producers that looked to the 'Hunts of Maximilian' for inspiration in the seventeenth century. A set of tapestries known as the 'Hunter's Chase', designed by Francis Cleyn and woven at Mortlake in the 1640s, was based in part on van Orley's series with some added scenes (Wace 1935). At the Gobelins in Paris straight copies of the 'Hunts', complete with the original borders, were woven from the 1680s onwards, with two sets made for Louis XIV. (Helen Wyld, 2011)