The Martyrdom of Saint Barbara 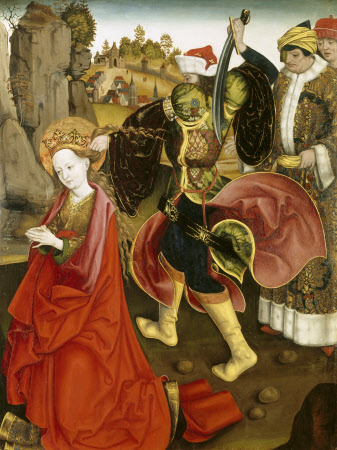 Saint Barbara was an early Christian saint and martyr. Her father, who was a rich pagan, kept her shut up in a tower to preserve her from the outside world. She secretly became a Christian and was condemned to death by beheading. As shown here, her father himself carried out the death sentence. As punishment for this, he was struck by lightening. A panel depicting The Flagellation of Saint Barbara by her Father, in the York Art Gallery (Lycett Green Bequest), of the same measurements, was probably from the same series or altarpiece. The artist was possibly the master painter of the High Altar of the Schottenkirche in Vienna and the Lilienfeld altarpiece, now in the Belvedere, Vienna, and has been recently identified as the Transylvanian Hans (Johannes) Siebenbürger (d. Vienna 1483).

Oil painting on pine panel, The Martyrdom of Saint Barbara, probably by Hans (Johannes) Siebenbürger (d. Vienna 1483) (previously ascribed to Master of the Schotten Alterpiece II or Master of the Vienna Schottenstift as the other panel of the saint's flagellation was ascribed to in York Art Gallery) [according to latest research by Magdalena Lanuszka for York Art Gallery], circa 1469. The saint, wearing red robes, kneels in prayer in the foreground of a rocky landscape while her father, Dioscusus, in brightly coloured clothes, stands behind her grasping her hair in his left hand, a sword raised in his right with which he is about to decapitate her; right, two men look on, the foremost of whom wears an embroidered robe edged with fur and a patch over his right eye; in the distance is a village on a hill. Siebenbürger received his training from Hans Pleydenwurfff in Nuremberg who was also was the teacher of Michael Wolgemut to whom this painting was previously attributed.