The Massacre of the Innocents (after Pieter Bruegel the elder) 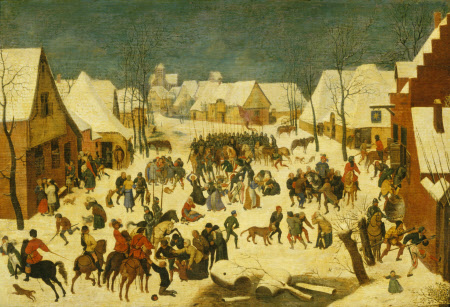 The scene depicts the New Testament event, when King Herod – learning of the birth of Christ, King of the Jews – orders the wholesale slaughter of infants in Bethlehem. The Holy Family had been warned by an angel, and had fled to Egypt. Brueghel has represented the scene as a contemporary event. The massacre is perpetrated in a broad village street filled with groups of soldiers and villagers. The prime version of this picture is in the Kunsthistorisches Museum, Vienna. Brueghel had copied this format from Pieter Bruegel the Elder, whose own version is now in the Royal Collection. The unique detail of the terrified child fleeing from the brutal soldiery breaking down doors at the far right distinguishes this picture from the many copies.

Oil painting on oak panel, The Massacre of the Innocents (after Bruegel the Elder). On the building at the right of the picture is a crown surmounting a monogram WAKR which indicates a previous owner, Wenzel Anton, Prince of Kaunitz-Rietberg (1711-1794). The biblical scene is represented as a contemporary event. The massacre is perpetrated in a broad village street filled with groups of soldiers and villagers; a troop of cavalry is drawn up in the background.