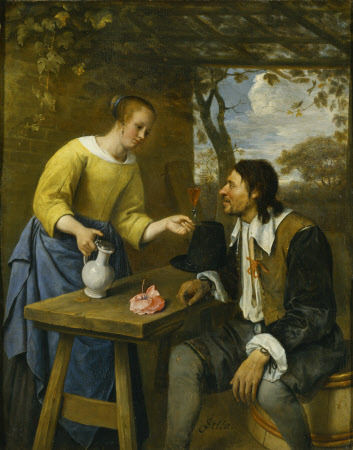 The title given to the picture is a typically 19th century narrative distortion of its real content, giving an innocent gloss to a painting whose symbolism suggests the very opposite. The young woman is shown offering the ‘traveller’ a glass of wine from a stoneware flagon. A woman offering a drink to a man always suggests some amorous exchange in Dutch 17th- century painting, and in this instance the overturned rose underlines the point, with its implication of lost honour.

Oil painting on oak panel, The Tired Traveller, Jan Steen (Leyden 1626 – Leyden 1679), bottom centre: J. Steen (JS in ligature), circa 1660-61. In the garden of a country inn a traveller sits on a barrel under the shade of a vine-covered trellis; on the table before him is a rose, apparently intended for the servant girl, wearing a lemon-coloured bodice and blue skirt, who offers him a glass of wine from a flagon she holds in her right hand. Pentimenti by the man's left leg and table leg.

Possibly in the collection of Victor-Am.d.e de Savoie, Prince de Carignan but not in his sale, 18 June 1743; bought by Bernard Pinney at the J.F. Tuffen sale, Christie’s, 11 April 1818, lot 100; in the collection of Sir Simon Clarke by 1819; bought at his sale by Henry Bevan, Christie’s, 9 May 1840, lot 100; entered the collection of Alfred de Rothschild between 1884 and 1902; by descent to his daughter Almina, Countess of Carnarvon; with Knoedler, London, in 1924, from whom acquired by Walter Samuel, 2nd Viscount Bearsted; Given by him to the National Trust in 1948.