The Interior of the Church of St Catherine, Utrecht 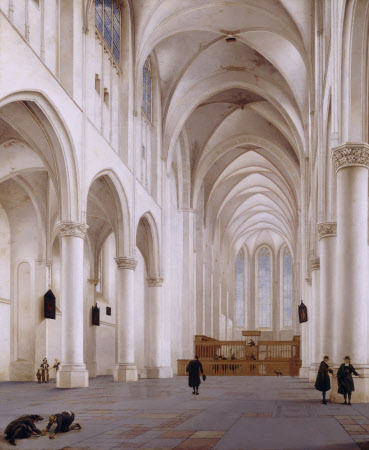 This detailed and skilfully painted picture of an empty church devoid of any adornments was designed to capture and celebrate the simple appearance of 17th-century Dutch Protestant church interiors. It is a study of the empty space as a symbol of Protestant thought, which argued that the written word of God was paramount and that images were false gods. Churches across northern Europe were stripped and remodelled in response to Protestant reformers in the 16th century. The painting depicts the interior of St Catherine’s Church in Utrecht and is by the artist Pieter Janszoon Saenredam (1597–1665), who painted many similar images of identifiable church interiors. The inclusion of people in the scene creates a sense of scale. Two figures in the foreground are kneeling together over a piece of paper, while a couple are seen in conversation, and another man walks into the distance. The visual harmony and purity of this scene, with its whitewashed interiors and figures dressed in black, became a typical theme in Saenredam’s work.

Oil painting on oak panel, The Interior of the Church of St Catherine, Utrecht, by Pieter Janszoon Saenredam (Assendelft 1597 - Haarlem 1665), c.1660. The figures are possibly by another artist, Isaak van Nikelen. A view of the nave and left aisle of the church, looking towards the east end, with the choir beyond and a preacher and small congregation; two kneeling men are taking a rubbing from a stone in the left foreground and six figures are disposed about the nave and aisle. The Church of St Catherine, founded in 1470 for the Carmelites and completed in 1551 after being transferred to the knights of St John, was restored in the late nineteenth century, and is now the Roman Catholic Archiepiscopal Cathedral.