The Four Times of Day: Morning 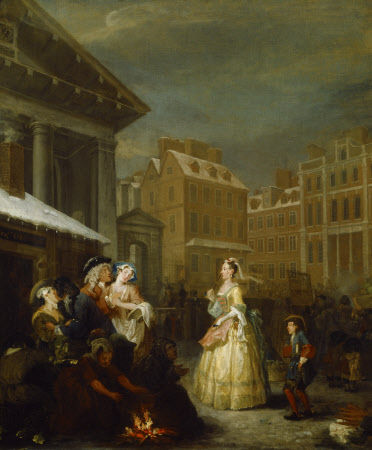 This picture is part of a set of four, entitled The Four Times of Day. Night is also at Upton House, but Noon and Evening belong to the Grimsthorpe and Drummond Castle Trustees. The pictures were intended as the models for engravings. The chief protagonist in this picture is a spinster, dressed in finery, on her way to church. She appears little affected by the wintry air, although her foot-boy, who carries her hymnal, has a reddened nose from the cold. She is transfixed by a cavorting couple, completely unaware of the begging woman at her feet. The scene is set in the Piazza of Covent Garden - the once-fashionable square. However, the coffee houses, taverns and brothels were dragging down the reputation of the area. In the right background, Dr Miller is seen setting up his stand for the sale of pills supposed to cure the venereal diseases caught in such places.

Oil painting on canvas, The Four Times of Day: Morning, by William Hogarth (London 1697 - London 1764), 1736. A scene in Covent Garden piazza early on a winter's morning. In a group at the right outside Tom King's Coffee House two young men are making love to two market girls, and two elderly women are crouched over a fire; one of these solicits alms from a lady, centre, on her way to St. Paul's Church accompanied by her footboy carrying a prayer book. The clock shows 7 a.m. and the Latin inscription underneath reads 'Sic Transit Gloria Mundi', reminding us that none of this world's glories is permanent. In the background is a crowd of figures, some of whom are assembled round a quack on whose board is inscribed D. Miller's Famous (in the engraving this name is altered to Dr Rock (1690 - 1777), the quack doctor previously seen in A Harlot's Progress.

The artist's sale, his house, Leicester Fileds, 28 Feb 1744/5, sold, for 26 gns (Night) and 20 gns (Morning), to Sir William Heathcote, 1st Bt; thence by descent (included in an illustrated MS inventory of the pictures of Hursley Park, Hants, of 1843, in Dept. of Special Collections, Getty Center, Malibu) as nos. 11 and 12 in the South Drawing Room, with a note that they featured in a Catalogue of Pictures in the Heathcote house in St James's Square of 1748); Heathcote Heirlooms sale, Christie's, 27 May 1938, lot 29; bought by Sir Alec Martin on behalf of Viscount Bearsted for 2.400 gns (outbidding the Earl of Lancaster, who had commendably wished to re-unite the set); given with Upton House to the National Trust by Walter Samuel, 2nd Viscount Bearsted (1882 – 1948), in 1948, shortly before his death