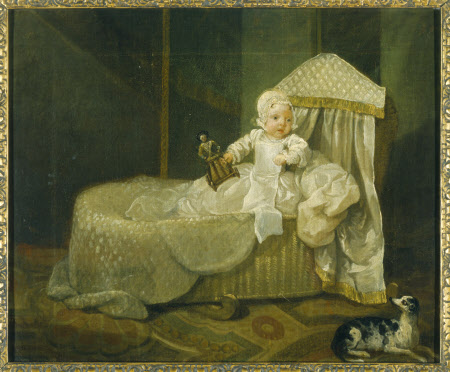 Gerard Anne Edwards was the son of Lord Anne Hamilton (1709-1748), third son of James 4th Duke of Hamilton and 1st Duke of Brandon, who was named after his godmother, Queen Anne. His mother, Mary Edwards (1704/5-1743), was reputedly the richest heiress in England. When she discovered her husband had used his adoption of her name to appropriate some of her stocks, she repudiated her marriage, and had her son baptised as the child of a single woman. Gerard was later known as ‘Handsome Edwards’, and married Lady Jane Noel, second daughter of Baptist Noel, 4th Earl of Gainsborough. The same toy is held by Gerard in Hogarth’s group portrait of the Edwards family (now in a private collection), in which the dog also appears.

Oil painting on canvas, Gerard Anne Edwards Hamilton (1732–1773) in his Cradle by William Hogarth (London 1697 - London 1764), signed W.Hogarth Pinxit, circa 1732. A full-length horizontal portrait of a small child sitting up in his cradle, looking to the right, holding a doll in a go-cart in his right hand; a dog is lying on the carpet, right. Gerard Anne Edwards (1732/3–1773) of Welham Grove, Leicestershire, was the son of Lord Anne Hamilton (1709–1748; third son of James, 4th Duke of Hamilton & 1st Duke of Brandon, named after his godmother, Queen Anne, who took the name of Edwards ) and the thoroughly level-headed, but self-protective heiress, Mary Edwards (1704/5–1743) of Kensington, who repudiated her marriage and had the child baptized as the son of single woman. He was later known as ‘Handsome Edwards’ and married Lady Jane Noel, second daughter of Baptist Noel, 4th Earl of Gainsborough of the first creation. Their only son, Gerard Noel Edwards, succeeded to the Hicks and Noel estates on the death of the 6th & last Earl of Gainsborough of the first creation in 1798, and, by special remainder, to his father-in-law, Admiral Lord Barham’s baronetcy, and took his mother’s name, thus becoming Sir Gerard Noel Noel, 2nd Bt (1759–1838). His eldest son, Charles Noel, by his first marriage, was in 1841 made 1st Earl of Gainsborough of the second creation.