A Gentleman holding a Transverse Flute 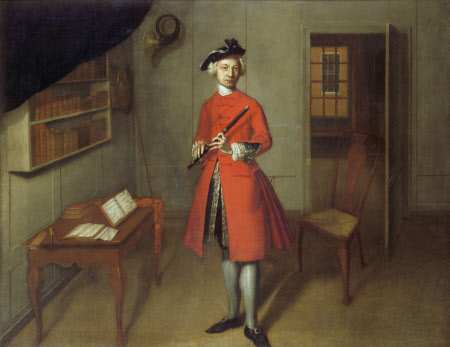 The German, or transverse flute, shown here, was the most fashionable instrument in amateur music circles at the time that this picture was painted, in around 1735. It replaced the original flute or recorder, and was a novelty in the country at this date. It has been the matter of debate as to whether this picture is a genre piece, or a portrait. The details in the picture suggest that it is the latter: his dress and the cuirass in the corner of the room suggest military associations, while his sword, dress and cane suggest he was a gentleman. It seems likeliest that he was indeed a gentleman, but who perhaps played in the band of a city militia.

Oil painting on canvas, A Gentleman holding a Transverse Flute, attributed to James Cole (fl.before 1720 - 1744) or John Cole (fl.1719), as if carved into hanging bookcase): I. Cole, circa 1735. A full-length portrait of a youngish man standing in the centre of the sparsely furnished panelled room of a town house, wearing a long red surcoat, over a brocade-edged coat and a black tricorn hat edged with gold, facing the spectator, about to play a flute. On the right a chair is placed by an open door, through which another room is visible and a house beyond; on the left, a table, on which are some music scores; a ruler and dividers stand against the wall beneath a hanging bookcase; on the far wall hangs a French horn; a cuirass hangs between this and the bookcase.

I.Cole (as if carved onto hanging bookcase)