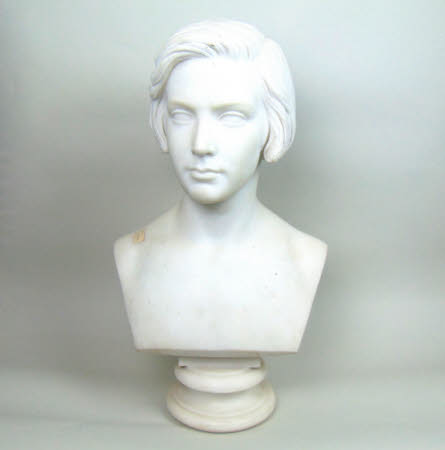 Carrara marble on turned marble socle, Adelbert Wellington Brownlow Cust (1844-1921), Lawrence MacDonald (1799-1878), 1856, signed ‘L. MACDONALD. FECIT. ROMÆ. 1856’ on truncation at rear. Adelbert is shown as a young boy of around twelve, with long hair cropped below the ears and a side parting with fringe swept to the right.

The bust is by Lawrence MacDonald, a Scottish sculptor working in Rome in the former studio of Bertel Thorvaldsen. According to an Art Journal article of 1854, MacDonald established himself as the one of the leading bust portraitists for Victorian high-society. His studio was filled with ‘the peerage done into marble, a plaster gallery of rank and fashion’ (Florentina, Art Journal, 1854, p.351). The bust was exhibited at the Royal Academy in 1857 (no.1308). MacDonald also produced NT 436815, a bust believed to be John Cust, 1st Earl Brownlow (1779-1853) or his son, John Hume Egerton, Viscount Alford (1812-51). Alice Rylance-Watson October 2018