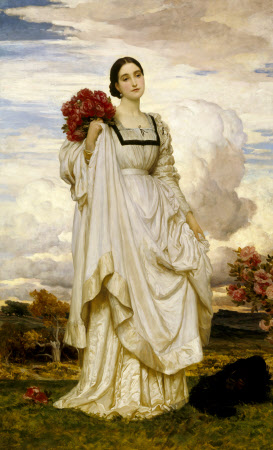 Various descriptions of Lady Brownlow's appearance have survived; one, from Mrs Gladstone in 1875 of the Countess apparently wearing the dress seen in this painting: '...at teatime today in white embroidered with gold regular toga sort of thing, and tonight with red beads, white handkerchief on her head. Oh lovely.' In 1893 Lady Paget described Lady Brownlow as the 'most beautiful of three sisters, every one of them the salt of the earth. She was seated between Lady Lothian and Lady Pembroke, the former in trailing black and the latter in trailing white draperies. Lady Brownlow was in sober grey of the same make, and they looked like the Three Fates. They all asked questions in high-pitched voices.' Lord and Lady Brownlow were considerable patrons of the arts; he was a trustee of the National Gallery and was responsible for commissioning George Frederic Watts to make a memorial statue to Tennyson in Lincoln; together they were patrons of the Home Arts and Industries Association, with which Mr and Mrs G F Watts, John Ruskin, William Morris and William de Morgan were also involved, and the object of which was to provide artistic work for the poor and disadvantaged. It was in one of their houses that Lord Charles Beresford coined the sobriquet ‘The Souls’, for the intellectual and aristocratic coterie amongst which they moved. (Both of accounts of Lady Brownlow are quoted from Jane Abdy and Charlotte Gere's The Souls, 1984).