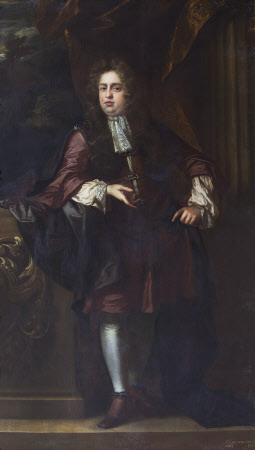 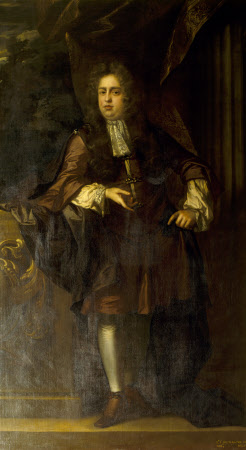 This painting is one of the four 'verie large Pictures' that seem to have been in the Saloon at Belton since 1688. When Riley painted these pictures, he appears to have had the assistance of the recently-arrived John Closterman. He reputedly got £40 a full-length, painting only the heads himself, and giving Closterman just 30s (£1.50) for all the drapery Sir John Brownlow was the builder of Belton, where this picture remains today. He was the elder son of Sir Richard Brownlow, 2nd Bt, of Great Humby, and Elizabeth Freake. In 1676 he married his cousin, Alice Sherard, who bore him five daughters who reached adulthood. His daughter Eleanor (1691-1730), married Sir John Brownlow (1690-1754) 5th Bt, who was created Viscount Tyrconnel and Baron Charleville in 1718. The rumours of his suicide in the midst of apparent good fortune are hard to explain.

When Riley painted the four pictures at Belton (NT 436004.1-2 and 436005.1-2), he appears to have had the assistance of the recently-arrived John Closterman, and reputedly got £40 a full length, painting only the heads himself and giving Closterman just 30s (£1.50) for all the drapery. He was baptised on 6 July 1659 at Rippingale, Lincolnshire, England. He married on 27 March 1676 at Westminster Abbey, Alice Sherard (1659-1721), the daughter of Richard Sherard (d.1668) of Lobthorpe and Margaret Dewe, in conformity with the 'earnest desire' of their childless great uncle, 'Old' Sir John Brownlow (1594-1679) who settled his estates on them. His children were: Elizabeth Brownlow, Countess of Exeter (1681-1723); .Alicia Brownlow, Lady Guilford (1684-1727); Margaret Brownlow (1687-1710); Jane Brownlow, Duchess of Ancaster (1689-1736) and Eleanor Brownlow, Viscountess Tyrconnel (1691-1730). He succeeded to the title of 3rd Baronet Brownlow, of Humby on 30 August 1668. He was MP for Grantham from 1689 to 1697. On 23 November 1679 he inherited the Belton estates of his great-uncle Sir John, 1st and last Baronet. This gave the couple £20,000 in ready money and an income of around £9,000 a year. They launched into London society, bought themselves a house in Southampton (now Bloomsbury Square) and then created a new country house, Belton, which would be an appropriate setting to their rank and wealth. The design of Belton is attributed to the soldier-architect William Winde (d.1722), and preparations for the new house began in 1684. The house was then opulently and fashionably decorated. Having built himself an appropriately grand new house, and even on 29 October 1695 entertained King William III. Everything seemed set for the young man's further advancement, perhaps even a peerage. But in July 1697, a contemporary reported that 'Sir John Brownlow member of Parliament for Grantham... last week shot himself at Mr Freakes (his uncle's house) in Dorsetshire, but the reason not known'. The reason is still not known. He died on 16 July 1697 at age 38, without surviving male issue. He was buried at Belton, Lincolnshire, England. His will (dated 29 July 1689) was probated on 2 September 1697.

Listed in the inventory of 1688; purchased with a grant from the National Heritage Memorial Fund (NHMF) from Edward John Peregrine Cust, 7th Baron Brownlow, C. St J. (b.1936) in 1984