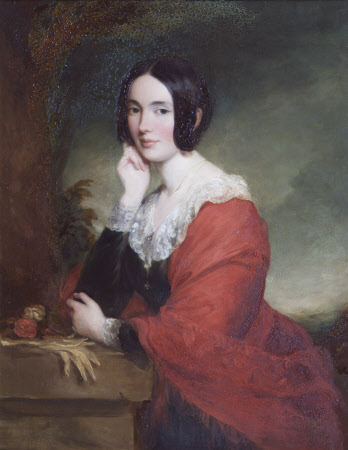 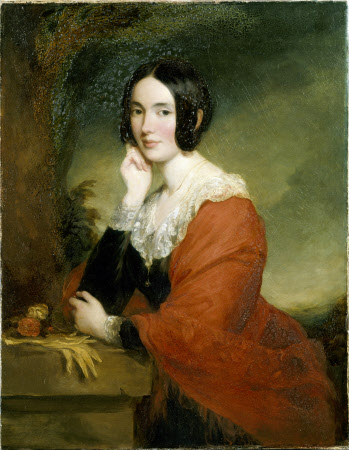 This was recorded in Grant’s sitters-book under April 1841 as: ‘The Lady Marian Alford – Kit-Kat £105.’ The portrait was copied in miniature by William Derby in 1844. Lady Marianne Margaret Compton, Viscountess Alford, was known as Lady Marian Alford (1817-1888). She was the eldest daughter of the 2nd Marquess of Northampton and Margaret Maclean-Clephane, and married John Hume (Egerton-Cust), Viscount Alford (1842-1867) in 1841. He was the elder son of the 1st Earl Brownlow, to whom she bore two sons, the later 2nd and 3rd Earls Brownlow. Lady Marian was born in Rome, and spent her childhood in Italy, not returning to England with her parents until 1830. She retained a love of the country throughout her life, expressed both in her art and in frequent sojourns there. Her watercolours – a handful of which survive at Belton – combine strong evocations of Italian Renaissance paintings with touches of Victorian medievalising romanticism.

Oil painting on canvas, Lady Marian Margaret Compton, Viscountess Alford (1817-1888) by Sir Francis Grant PRA (Kilgraston 1803 - Melton Mowbray 1878),1841. A three-quarter-length portrait, standing, turned to the left, gazing at the spectator, leaning on a stone pedestal on the left, her left hand by her chin and the right hand on the pedestal on which her gloves are lying. Her dark brown hair is looped below her ears and she is wearing a dark blue dress with white lace collar and cuffs. a red shawl or wrap is draped over her right shoulder. A tree trunk on the left leaves and branches above her head and distant view of landscape and sky to the right.