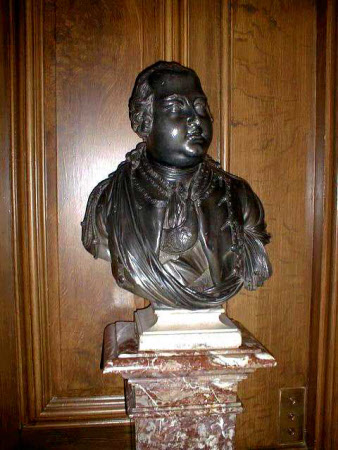 Prince William Augustus, Duke of Cumberland (1721-65) was the youngest son of George II (1783-1760). He is best remembered for suppressing The Jacobite Rebellion, an attempt by the Stuarts of Scotland to regain the British throne. The Rebellion culminated in the Battle of Culloden, 1746, with a British victory against the Highlanders. Prince William, otherwise known as ‘Butcher Cumberland’ by his Tory opponents or ‘Sweet William’ by his Whig supporters, is depicted in this bust by the British sculptor Sir Henry Cheere (1703-81). The inscription on the base, ‘REPUBLICA SERVATA MDCCXLVI’ records the date of Cumberland’s victory ‘in the service of the republic’. The bust was made for Viscount Tyrconnel (1690-1754) and delivered to Belton in 1747 where it was displayed in the Marble Hall, according to the 1754 Tyrconnel Inventory. A letter from Cust to Tyrconnel dated 7 November 1747 reveals that Cheere demanded an extra six shillings for the bust: ‘I was at Cheer’s the Statuary this morning who tells me that he sent the Duke’s Bust to your Lordship by this weeks carrier. I have therefore paid him the nine guineas but he made an extraordinary demand of six shillings for the packing case which I woud fain have had him remit but cou’d not prevail’. (Records of the Cust Family, p.207) This extra charge, however, did not sour relations as Cheere was commissioned to sculpt the memorial to Tyrconnel’s nephew William Cust at St Wulfram’s Church, Grantham, as well as a funerary monument to the Viscount in Belton Church. An identical bust of Cumberland by Cheere, dated 1746-7, is in the collection of the Victoria and Albert Museum, London (inventory number A.12-1947). There is also a reduced lead version, attributed to the workshop of the Cheere brothers and exhibited at Trinity Fine Arts 31 May-20 June 1990 (no.19). The reduced version stands at 215 mm as opposed to the 650-660 mm of the Belton and V&A busts. It has been pointed out that Henry’s brother John Cheere may have collaborated on the large busts of Cumberland as well as the 1770 equestrian statue of the Duke in Cavendish Square. Alice Rylance-Watson September 2018