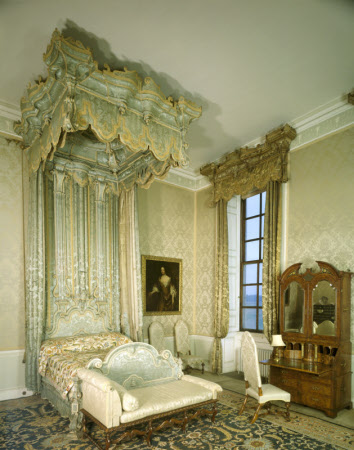 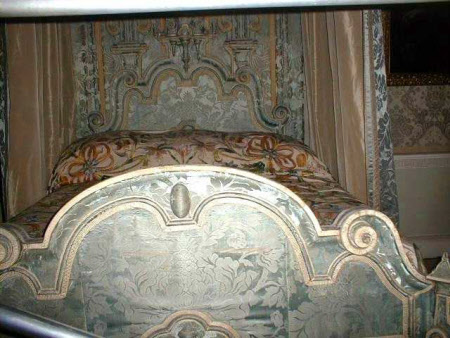 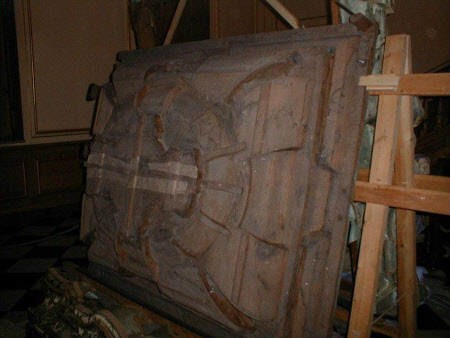 A state tester bedstead, constructed from oak and deal and covered in silk, attributed to Francis Lapiere (fl.1653-1714) London, circa 1710. The massive canopy with elaborately moulded and shaped cornice framing a domed interior with tapering bracketed angles and with double scalloped pelmets. The back with moulded and bracketed pilasters. The headboard of arched and scrolled outline. The footboard of plainer arched and scrolled form. The whole mounted on canted and scrolled bracket feet. Close covered throughout with pale blue silk brocade of floral design in two tones, the side curtains en-suite.

The inspiration for state beds of this period is often attributed to Daniel Marot (1661-1752), whose published designs are certainly the most numerous and complete expressions of the style. The profile of the cornice with its prominent corners is repeated in a more emphatic manner on other examples, such as those made for the Duke of Devonshire and the Earl of Melville in the 1690s. Both these beds are attributed to Francis Lapiere but Marot’s contribution to the design is unclear. The designs appear in Marot’s engravings post 1712 and demonstrate only that that he was aware of of the styleand approved but there is no evidence to suggest that the designs are his own. Marot was however instrumental in promoting such beds in Holland where they remained popular throughout the first half of the 18th century. A similar, although somewhat more elaborate State Bed was supplied to William Blathwayt at Dyrham Park sometime after 1703, it does nor appear in the 1703 inventory but is included in 1710. It is thought that Blathwayt ordered the bed in anticipation of a possible visit from Queen Anne in 1703, when she was expected in Bath but this did not happen. This 'the best bed' was intended as the principle element in a luxurious suite of furniture for the 'best bedchamber above stairs' in the state apartment on the first floor of the East Wing. The set comprised: door curtains and valence, window valences and a suite of seat furniture with six chairs and four stools all matching the bed hangings. The window curtains were of yellow silk damask and the walls were covered in tapestry. The Belton bed is not identifiable in either the 1737 or 1754 house inventories but we do know that it was re-upholstered in 1813 and was most likely hung with crimson silk which Tyrconnel seemed to favour. Lord Brownlow, later the 1st Earl, was responsible for the re-upholstery in blue damask and employed William Stephens of 217 Piccadilly, London to carry out the work. An extensive bill survives describing the process and the materials used. He not only re-hung the bed but also supplied window pelmets and curtains and upholstered other furniture to match. See Lincoln RO ref. BNLW2/2/1/19. (James Weedon October 2018)