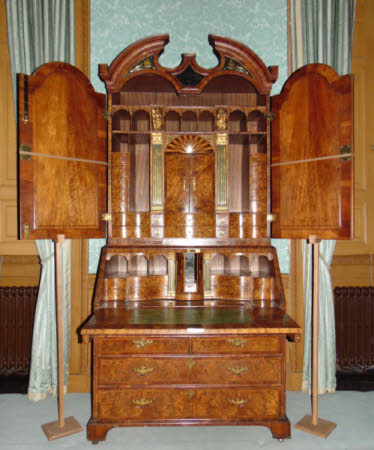 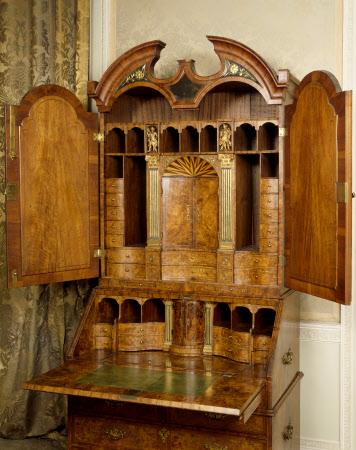 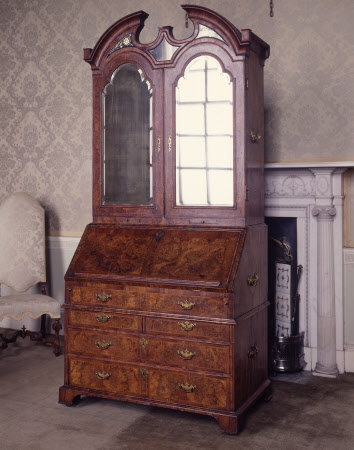 A featherbanded and crossbanded walnut and burr-walnt mirrored bureau cabinet, London, circa 1720. In three sections, the upper section with arched and moulded broken cornice inset with two segmental verre eglomise panels decorated with sunflowers and framing a lozenge shaped mirror panel, above two arched and bevelled mirror panelled doors (one mirror replaced) enclosing a fitted interior with pigeon holes racks and drawers in various sizes. All surrounding a central concave niche inlaid with a sunburst and mounted with a gilt metal mask and scroll spandrels above two curved doors framed by Corinthian pilasters with gilt wood capitals, each surmounted by standing figures of Mars and Minerva. The middle section with a hinged fall front enclosing a conforming serpentine fitted interior with a central convex cupboard. Two doors enclose a mirrored interior with chequered and rayed door flanked by pigeonholes and small drawers and a well below. The lower section with two short and two long drawers cross-banded and inlaid throughout with fine chevron-pattern lines. Original gilt brass engraved lock plates, loop handles and three pairs of carrying handles, the whole raised on bracket feet.

It is unclear when the bureau cabinet arrived at Belton and it can only be assumed that it was commissioned by Sir John Brownlow (1690-1754).This is a fine example of early 18th century London cabinet work and there are various names that could be attributed to the design and form although none of them a certainty. John Belchier (fl.1717-1753), cabinet-maker at 'The Sun' in St. Paul's Churchyard, London, is first recorded working in 1717 supplying 'all sorts of Cabinet Works, Chairs, Glasses, Sconces & Coach-Glasses.' A few examples from his workshop are labeled, and significantly, all of them are bureau-cabinets that share several features with this example, such as the cresting and shaped mirrored doors. Belchier's most famous commission is of two closely related cabinets with similar decoration supplied to John Meller (d. 1733), Queen Anne's Master in Chancery, for Erddig Castle, Wales. In its 1726 inventory, a 'Red Japan Cabinate' was listed in the 'Blew Mohair' bedroom, and has similar arch-headed and mirrored doors, now in the National Trust collection (NT1147081). Adam Bowett illustrates a bureau cabinet in 'Early Georgian Furniture 1715-1740' pg.78 plate 2:52 which is inscribed William Palleday, a number of walnut and oak bureaux by this maker are known with trade labels pasted on drawer interiors. These all have characteristics which would date them to the beginning of the 18th century. The only documented commission known, however, is one for Lady Heathcote for which payment of £1 14s 6d was received on 15 December 1713. A 13-inch glass in a walnut frame, and a square ‘falling’ table were supplied and repairs carried out to a chest of drawers. [V&A archives; Sotheby's, 5 October 1945, lot 82; 1 March 1974, lot 38A; Lincoln RO, 2 ANC 12/D/7]. The example illustrated in Bowetts book has similarities to the Belton cabinet, especially the detail in the upper section with mirrored doors, unusual side cornicing and central cartouche to the frieze. One further example was sold Christies 28th November 2002 lot 112 and attributed to the Master of the Royal Portuguese Cabinets. In the 1720s, a drawing of a bureau-cabinet, likewise featuring a rustic ogival-scrolled pediment, was included amongst designs made by Russian craftsmen, who had been sent to London for training by Czar Peter the Great, see: N. I. Guseva, 'Fedor Martynov, Russian Master Cabinet Maker', Furniture History, 1994, p.95, no.3. It has been suggested that their training may have taken place with the Strand cabinet-maker Peter Miller, who, in 1724, is recorded as executing a walnut bureau-cabinet of this form for export to Spain (Adam Bowett, Geffrye Museum Symposium, January 2002 and C. Gilbert, The Pictorial Dictionary of Marked London Furniture 1700-1840, Leeds, 1996, figs. 646 & 647). The cabinet's interior, like those of a number of related cabinets, is richly equipped with pigeon-holes and drawer nests around a 'tabernacle' compartment. (James Weedon September 2018)