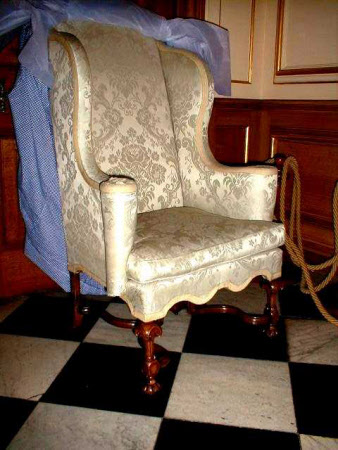 A walnut and beechwood upholstered wing-back armchair, in the manner of Thomas Roberts, London chair-maker (fl.1685-1714) circa 1690. The high shaped back with scrolled arms and loose cushioned seat, raised on tapering front pillar legs with large scrolled capitals joined by moulded shaped H stretchers and on fluted turned feet. The legs and stretchers of this chair are identical to the set of six side chairs (NT435036) in the Blue Bedroom at Belton.

Thomas Roberts (1685–1714) and Richard (1714–1729), at ‘The Royal Chair’, Marylebone St, London, joiners, chairmakers and carvers who provided much of the seat furniture for the royal household between 1685 and 1714. There are numerous examples of chairs that are attributed to the Roberts workshop including examples in the National Trust collection; a group of stools at Hardwick (NT 1127752) and a pair of armchairs (NT 1127753) which demonstrate the cross stretcher and pillar legs often associated with his work and which can be identified in this chair. (James Weedon August 2018)