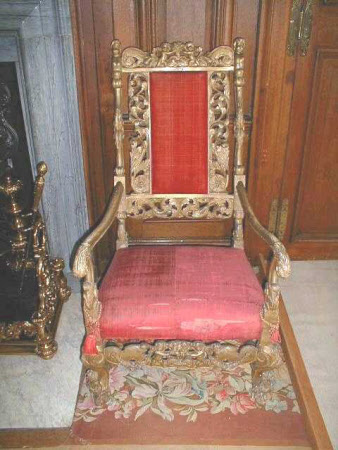 A set of four gilt-beech or walnut elbow chairs or open armchairs, in the manner of Thomas Roberts (fl.1685-1714) London, circa 1688. Probably supplied to Sir John Brownlow, Belton House, Lincolnshire on or before its completion in 1688. Each with a rectangular back with padded centre panel and pierced carved frame, the cresting carved with putti and foliage. The upholstered seats on out-turned scrolled fore legs carved at the base with kneeling putti and joined by pierced front stretchers carved with putti, swags and flowers. The arms with carved scrolled terminals an held by scrolled supports. Re-gilded and later upholstered in crimson silk velvet, re railed.

Adam Bowett discusses the form of these chairs in 'English Furniture 1660-1714' pg. 237. These are probably part of the 'tenn gold gilt Armchairs' recorded in the Drawing Room at Belton in the 1688 inventory. The out-turned fore-leg is unusual at this date but the arms and their supports more conventional, being 'in-line' with the frame. A set of seat furniture supplied by Thomas Roberts(1685–1714, chair-maker, London) at Knole has front legs that are formed of draped male and female figures and the fore-stretchers carved with two putti bearing trumpets, while the side and centre stretchers are carved with scrolls. The chairs are part of a larger set of upholstered furniture around a highly significant state bed (NT129447) ordered by the Great Wardrobe for James II’s apartments at Whitehall Palace in August 1688 and forming one of the most spectacular and historically important sets of late Stuart furniture in existence, the set further comprises six matching stools (NT129449.1 - 129449.6). (James Weedon August 2018)

Probably part of the 'tenn gold gilt Armchairs' supplied to Sir John Brownlow recorded in the Drawing Room at Belton in the 1688 inventory. Purchased with a grant from the National Heritage Memorial Fund (NHMF) from Edward John Peregrine Cust, 7th Baron Brownlow, C. St J. (b.1936) in 1984.