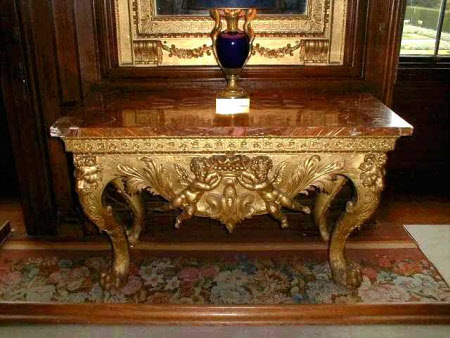 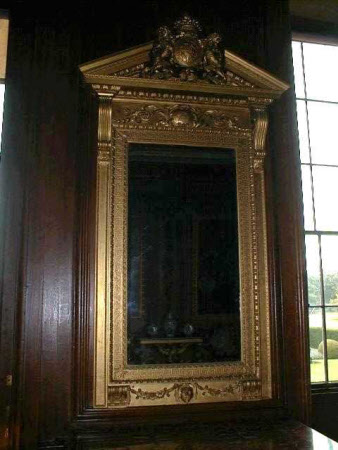 A pair of gilt wood pier tables and mirrors, after a design by James Gibbs (1682-1754) London, circa 1730. Bearing the Coat of Arms of Sir John Brownlow, Viscount Tyrconnel (1690-1754) Each mirror with a broken moulded pediment centred by the oversized coat of arms above a frieze with a cartouche bearing the Order of the Bath and flanked by reeded scrolled pilaster brackets. The rectangular plate within a Greek key and egg and dart border with a lower apron applied with floral swags and further brackets. Each table with a veneered marble top, one in jasper and the other alabaster above a Greek key frieze with applied flower heads and a deep apron centred by two putti holding a coronet with acanthus sprays and four massive cabriole legs headed by lion's masks and with lion's paw feet. Re-gilded.

The design of these Palladian pier mirrors, or 'tabernacle glasses', relates to drawings for mirrors of 1721-22 by the Scottish architect, James Gibbs (1682-1754), who published designs in his 'Book of Architecture' in 1728. These drawings predate similar designs by Gibbs' contemporaries, William Kent (c.1685-1748) and William Jones (1712-50) for example, who adapted the style for inclusion in 'The Gentleman's or Builder's Companion' of 1739.The term 'tabernacle' originally referred to a niche in a wall for a statue or bust and derives from antiquity where in classical temples such as the Pantheon in Rome, statues of deities were housed in niches around the walls. According to the furniture historian, Dr. Adam Bowett, the figure of the deity was replaced by mirrors. There was also a stylistic link between tabernacle mirrors and the rectangular architectural style of wall paneling which made its first appearance around 1720 (Adam Bowett, Early Georgian Furniture 1715-1740, 2009, pp. 294-299). The Saloon was gilded by Mark Anthony Hauduroy who was paid 15 guineas to do so in 1729. (Hauduroy also worked at Knowle in Kent for the 1st Duke of Dorset in 1723-4.) The Order of the Bath was an Order of Chivalry awarded to Viscount Tyrconnel in 1725 by George I. It would seem plausible therefore that the furniture was commissioned soon after in recognition of this award. It may have been Hauduroy who gilded the set in 1729. The furniture was certainly in place in The Saloon in 1737 as the Belton inventory for that year listed 'Two large pier glasses with three brass sconces to each' and two marble tables'. (James Weedon November 2018)