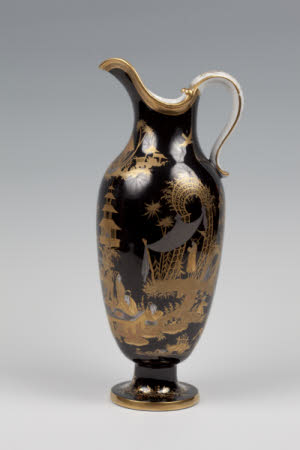 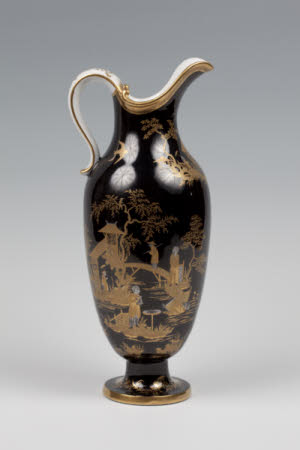 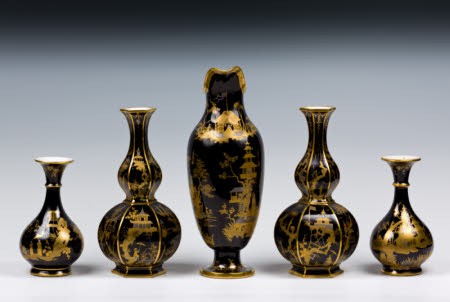 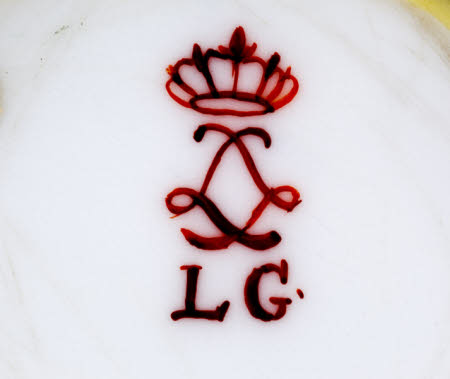 This porcelain jug boasts a lustrous black ground which is offset by glistening, Chinese-style designs in gold and platinum. It is part of a larger group of ornamental vessels at Belton House, which includes six vases, made at the Royal Porcelain Manufactory, in Sèvres, just outside Paris, between 1790 and 1791. These vessels were painted to resemble the lustrous, flawless finish of Japanese lacquerware, including boxes, screens and cabinets decorated with gold-painted scenes. Such lacquerware was at the heart of a lucrative import market from East Asia and imitations were often made as a response to more costly luxury materials that could not be easily replicated domestically. Interest in Japanese and Chinese lacquer peaked at the French court in the 1780s. Between 1790 and 1805, the Sèvres Manufactory produced lacquer-themed table services with painted flowers in gold and platinum. Belton's ornamental vases are even rarer still.

In 1783, Marie Antoinette revived the taste for oriental lacquer when she commissioned a lacquer-themed room at Versailles, furnished with seventeenth-century Japanese lacquer and neoclassical furniture by Adam Weisweiler mounted with the same.[i] In 1791, during the social and political upheaval of the Revolution, the Sèvres manufactory produced a lacquer-themed table service with colourful painted flowers, described as ‘black background, Chinese themed, in coloured gold and platinum’, for Charles-Louis Huguet de Sémonville (1759–1839), Louis XIV’s Envoy-Extraordinary to Genoa.[ii] Porcelain in this rich taste was a technical triumph and between 1790 and 1805 several services were made. Rarer still were ornamental vessels, such as this jug and six vases at Belton House, Lincolnshire (see also NT 433511-3).[iii] Elegant in form, the seven vessels have unctuous grounds in a blue-black pigment produced from iron and cobalt. It is applied in thick layers in a technique developed at Sèvres for the new hard-paste body in the early 1780s.[iv] The colour imitated rare Chinese black-grounds (wujin) on porcelain, identified as ‘mirror black’ in the letters of Père François-Xavier d’Entrecolles (1664–1741), a French Jesuit who lived in China, and studied ceramic production.[v] By happy coincidence, at Belton there are two pairs of mirror black vases, of about 1710–25, which have been in the house since at least 1754: one has gold decoration and the other silver, which has tarnished (see NT 433347).[vi] Around 1789–90, Sèvres gilders began to use platinum in place of silver when its commercial application became possible following chemists’ discovery that arsenic could be used as a flux. Platinum was combined with two tones of gold – yellow and copper red – and the matte and burnished surfaces were then chased with fine details. The playful chinoiseries on this jug were inspired by the designs of Jean-Baptiste Pillement (1728–1808), including Recueil des tentes Chinoises (Paris, 1770), but other motifs, such as the pagodas, were based on Japanese lacquer.[vii] The ornamental jug, usually found in pairs, has the painter’s mark of Louis-Antoine Le Grand (active 1776–1824), who specialised in gold chinoiseries.[viii] The other vessels at Belton include a pair of hexagonal double-gourd bottles (NT 433513); a pair of pot-pourri vases with Egyptian lion’s head handles missing their covers (NT 433512); and two pear-shape vases, which, based on their ornament, are not a pair (NT 433511).[ix] In addition, an unidentified pair of similarly decorated vases on square ormolu plinths was sold by the Brownlow family in 1929.[x] From the evidence of factory drawings of objects in his collection, the nine pieces were probably ordered by Antoine VII, duc de Gramont (1722–1801), a collector of Asian ceramics, between 1787 and 1790. Eleven similar vessels were apparently ordered by him in 1790. However, twelve pieces, matching those at Belton, were included in a sale in Paris on 18 April 1803 (lot 339), held on behalf of the Mont de piété, institutional pawnbrokers. The date coincided with the Peace of Amiens, when the city was awash with English tourists, including John Cust (1779–1853), later 1st Earl Brownlow, who was on his Grand Tour and may have purchased the lot. Alternatively, a cousin, Francis Henry Egerton, 8th Earl of Bridgewater (1756–1829), who was living in Paris at the hôtel Egerton, rue St Honoré, may have been the buyer. Known for his eccentricities, he famously dressed his dogs for dinner. On his death, his collection was shipped from France to his family seat, Ashridge Park, Hertfordshire. The house later passed by inheritance to the Brownlow family, who sold it in the 1920s. Notes [i] Monika Kopplin, Japanische Lacke: die Sammlung der Königin Marie-Antoinette (Munich, 2001). [ii] In the original source, ‘Fond noir, Chinois en or de couleurs et platine’. [iii] Christie’s, London, 14–15 December 2015, lot 167. [iv] Antoine d’Albis, ‘Hard-paste porcelain from Sèvres with Chinoiserie Decoration in Coloured Gold and Platinum’, The Metropolitan Museum Journal, 37 (2002), pp. 267–76; Adrian Sassoon, The J. Paul Getty Museum Catalogue of the Collections: Vincennes and Sèvres Porcelain (Malibu, CA, 1991), pp. 152–4; Dawson 1994, p. 214. [v] Chinese potters added manganese oxide to their pigment: see Ströber 2005, p. 33. [vi] NT 433347.1–2 and NT 433438.1–2; and LA, Brownlow Papers, BNLW 2/2/7/7. [vii] Plate 6 was used for the jug: see Schwartz 2003, cat. no. 101. [viii] The jug was described at Sèvres as ‘buire a fleurs Duplessis uni’: see De Bellaigue 2009, vol. 1, p. 29; and for a set of different form: Marie Noëlle Pinot de Villechenon, Sèvres: Porcelain from the Sèvres Museum, 1740 to the Present Day, translated by John Gilbert (London, 1997), p. 43. [ix] NT 433513, 433512 and 433511.1–2; and for the pair to NT 433511.2, see Christie’s, Paris, 17 November 2011, lot 110. The hexagonal double gourd bottles are identified in factory drawings as ‘Bouteille octogonne du duc de Gramonts 1787’ and ‘Vase Grammont bouteille à pans’; the pot-pourri vases are ‘Vase pot pourri à têtes de lions’; and the pear-shaped vases, ‘Grammont Ovale’. Gramont was evidently also spelt ‘Grammont’ by the factory’s employees. [x] Christie’s, London, 14 March 1929, lots 64. The vases were 26.7 cm (10 ½ in.) high. All nine pieces were included in the sale at Christie’s (see lots 60–3). Catalogue entry adapted from Patricia F. Ferguson, Ceramics: 400 Years of British Collecting in 100 Masterpieces, Philip Wilson Publishers, 2016.

Acquired by purchase from Lord Brownlow with grants from the National Heritage Memorial Fund in January 1984.

Interlaced doubled 'L', the factory mark, beneath a crown indicating a hard-paste porcelain, above a painter's mark, 'LG' in iron-red enamel