Queen Victoria at her spinning wheel 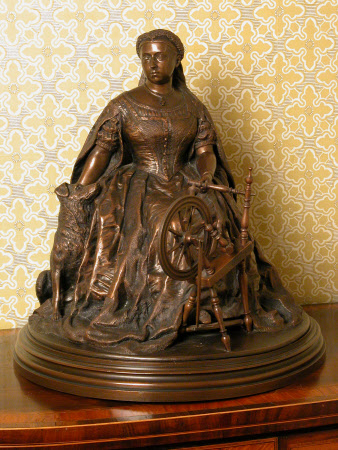 Bronze on circular bronze base, Queen Victoria (1819 - 1901) at her spinning wheel, Sir Joseph Edgar Boehm RA (Vienna 1834 - London 1890), 1869, signed and dated on back of chair 'Boehm fecit | Osborne 1869'. A domestic portrayal of Queen Victoria at a spinning wheel, with her collie 'Sharrp' seated at her proper right side. She wears a crown, a widow's cap, a necklace with a pendant cross, a bodice and long dress and looks out to proper right. The Queen is seated in an upholstered armchair surmounted by a tiny crown.

The original bronze statuette after which this copy was made was commissioned by Queen Victoria in 1869, at her Isle of Wight residence, Osborne House (Royal Collection Trust, RCIN 2021). Numerous copies were subsequently ordered, produced in bronze and silver plate by the Birmingham foundry Elkington & Co. and in plaster (see RCIN 15980, 26321, 34132). This bronze copy was presented by Victoria to Benjamin Disraeli (1804-81) at his final audience on relinquishing office in 1880. Boehm is first recorded in Victoria's journal as having visited Osborne House on 21 January 1869 to model 'Andrew', the Princess Louise's favourite horse. Developing a friendly acquaintance with the Queen, in part owed to their mutual love of horses, Boehm then began the model for this statuette, just a day later. By mid-February the bronze had been cast. The Queen was delighted with Boehm's flattering 'home-spun' depiction, and promptly commissioned a further thirteen works from the sculptor in 1869 alone, the most prestigious being a full-size marble statue with Sharp at her side installed in the Grand Vestibule at Windsor Castle (RCIN 35336). This began Boehm's twenty-two year association with the Royal Family, resulting in a continuous stream of commissions until the sculptor's death in 1890. Alice Rylance-Watson January 2019

Presented by Queen Victoria to Disraeli at his final audience on relinquishing office in 1880.