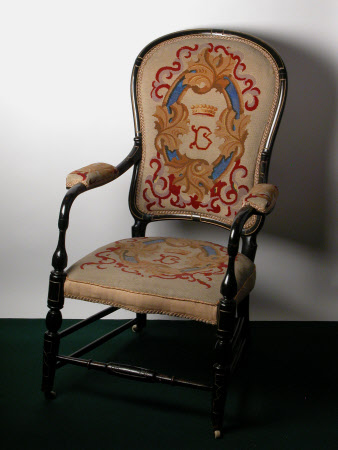 This ebonised wood armchair, decorated with a coronet and the letter 'B', was embroidered by Mary Anne Disraeli to commemorate her becoming Viscountess Beaconsfield in 1868.

A large ebonised beech and needlework open armchair, English, 1868. Worked by Mary Anne Disraeli upon becoming Viscountess Beaconsfield in 1868. The red, gold and blue scrolling cartouche design to the back and the serpentine seat centred with the letter 'B' beneath a coronet, the back of arched and waisted form, the arms with padded rests and baluster front supports, the ebonised frame with incised gilt detail, standing on turned and tapering legs joined by multiple stretchers and with ceramic castors.

Visible in the 1881 photograph of The Drawing Room when it was the Disraelis' library.