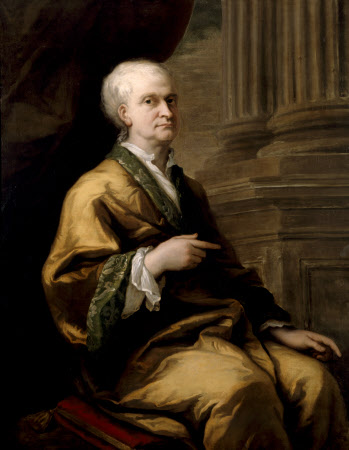 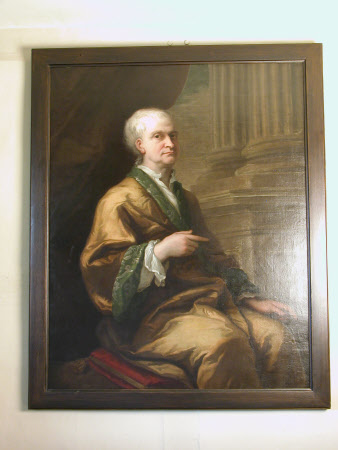 Oil painting on canvas, Sir Isaac Newton (1642-1727) by Sir James Thornhill (Melcombe Regis 1675 - Stalbridge 1734), 1712. A three-quarter-length portrait, seated, turned to the right, almost profile, gazing at the spectator, short grey hair, wearing a pale-brown dressing-gown lined with dark-green, shown on sleeves and lapels, over a white shirt. Pointing with his right hand towards a pair of fluted stone pillars on the right, drape on the left. Sir Isaac Newton was born at Woolsthorpe Manor and made his first experiments in gravity there, inspired by the fall of an apple from a tree. Until the purchase of this portrait, the house lacked family possessions or even a painted portrait of the great mathematician and this work established a vivid physical presence of the scientist. Thornhill's presentation of Newton without a wig focuses our attention on his head and, by implication, on the mind working within it. The National Trust has owned Woolsthorpe Manor since 1942, the 300th anniversary of Newton's birth, when the house was bought to serve as a permanent memorial to Britain's great scientist.

Probably by descent from Sarah Newton within the Foulds family to Miss Dorothy Hylda Foulds (1901-1977); private collection; with Historical Portraits Ltd. (Philip Mould); purchased by the National Trust for £30,000 with the help of a grant of £14,000 from the Art Fund, 1994.