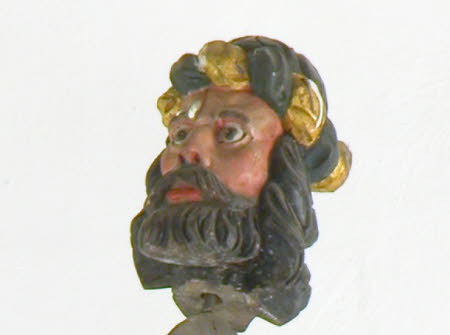 Wood, an heraldic crest of the Earldom Ferrers, British (English School), probably 19th century. A carved and painted wooden head, representing a man with black flowing beard and hair, wreathed with a torse entwined blue and gold. A representation the crest of the Shirley (Earldom Ferrers) coat of arms. The head painted naturalistically, the paintwork significantly chipped. The base of the neck drilled with a circular channel into which is inserted a metal rod.

The head of an Arab Muslim, usually shown ‘wreathed’, wearing a torse around the head, appears frequently as a motif (or charge) in European heraldry. In the language of heraldry the person depicted is described (or blazoned) as a ‘Saracen’, a term initially applied by Christian Europeans to nomadic peoples of the Arabian Peninsula and Levant. Usage developed during the Crusades (1096-1271) to describe Arabs or Muslims of any ethnicity, especially those opposed to Christianity. Within this context the term gained derogatory meaning. The image of the ‘Saracen’ in European heraldry is usually stereotyped. Several National Trust properties were, at one time in their history, owned by families whose coats of arms and/or crests incorporated a ‘Saracen’s head’ as an heraldic charge, and thus it appears on objects which survive in National Trust collections. The crest of the Shirley family coat of arms, for example, shows a ‘Saracen’s’ head in profile, facing dexter (left), couped (cut at the neck), and ‘wreathed’ about the temples with a torse (twisted roll of fabric) of or (gold, often shown as yellow) and azure (blue). Shirley crests are mounted as sculptures in the family chapel in the grounds of Staunton Harold Hall (NT 426823-426825).