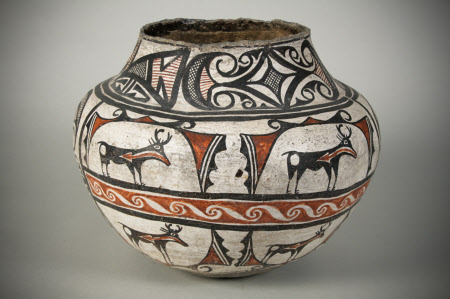 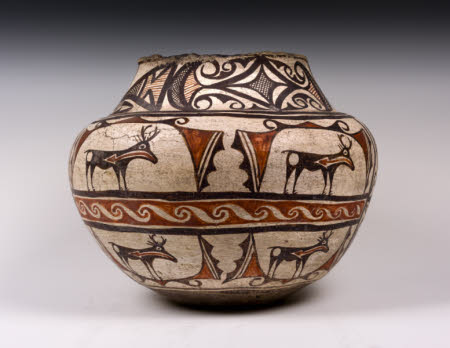 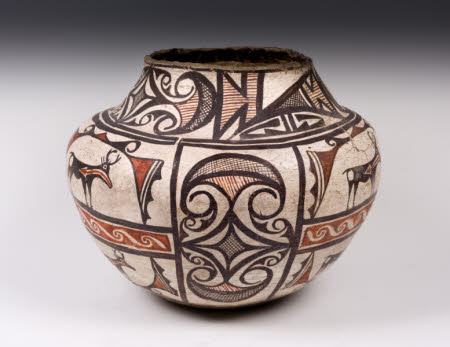 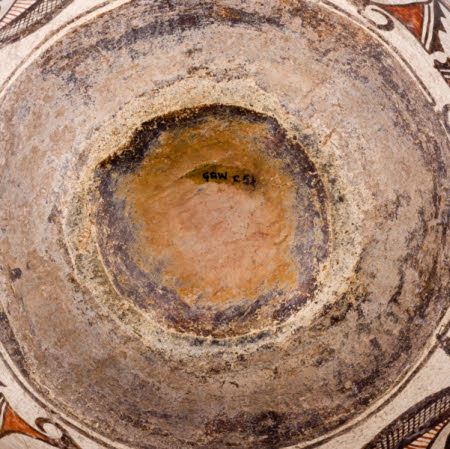 The nineteenth century was the great age of expeditions to uncharted lands motivated by political and commercial ambitions, which opened up the cultures of the world to Britain’s progressive élite. Trained as diplomats, scientists and archaeologists, and exposed to the pioneering disciplines of ethnology and anthropology, many returned from the ‘field’ with objects made by these cultures. [1] Briefly enjoyed for their newness, most were later sold or given to museums. An exception is this humble painted earthenware water jar at Gawthorpe Hall, made around 1870–80 by a Native American woman, a member of the ancient A’shiwi people of New Mexico, known as the Zuni Indians when ‘discovered’ in the late 1870s. [2] In 1879, the self-taught American geologist and anthropologist Colonel James D. Stevenson (1840–88), of the newly founded United States Bureau of American Ethnology, led an expedition to study New Mexico’s Zuni Pueblo and collect cultural artefacts. A U.S. territory since 1850, the isolated desert culture was under threat from the transcontinental railroad opened in 1880. Stevenson collected over 2,000 pottery vessels in 1879 and 1881, both ancient burial material and modern domestic objects, which are now in the Smithsonian Institution National Museum of Natural History, Washington, D.C., founded in 1846. They include domestic earthenware water-jars that, like the example at Gawthorpe, had become obsolete with the introduction of mass-produced metal buckets. [3] This large water-jar (‘olla’) was hand-coiled from local clay and covered with white slip. The base has a shallow impression, to help balance the water-filled vessel when a woman carried it on her head as she navigated the steep inclines to the multi-level adobe houses. The exuberant abstract design, painted in black and red mineral based pigments, includes a double-ended scroll and dagger motif on the neck, repeated on the side panels. The arched structures contain deer or elk, each with a red line running from its heart to its mouth, representing the hunter’s prayer for the deer’s spirit to surrender. [4] A wave-like band around the centre was a reminder to pray for rain for the harvest. The surface was polished with a stone before firing, using animal dung as fuel. It was important that female potters were ‘of pure heart’ to ensure that Mother Earth would continue to supply their raw material. In England, demand for these wares was stimulated in 1879 by a report in the Times on Zuni pottery, ‘entirely uninfluenced by surrounding civilizations’. [5] In 1885, the Pitt Rivers Museum, Oxford, received a donation of the pottery from the Smithsonian Institution, together with albumen photographs taken in 1879–80 by John Karl Hillers documenting Zuni and Hopi pueblos in New Mexico and annotated by Stevenson. [6] This followed a visit by Britain’s first professional anthropologist, Sir Edward Burnett Tylor, and the British naturalist Henry Nottidge Moseley.[7] Around 1912, the intrepid Captain the Hon. Lawrence Ughtred Kay-Shuttleworth (1887–1917) returned to Gawthorpe from Arizona with this tourist curio. An Elizabethan mansion, refurbished by the Gothic Revival architect A. W. N. Pugin, Gawthorpe had been the home of the Shuttleworth family since the 14th century. His sister, the textile collector the Hon. Rachel B. Kay- Shuttleworth (1886–1967), recorded it in her unpublished catalogue as a ‘ritual pot from the Zuni Indians’, adding ‘when hunters drink from this they will be successful’. [8] Shortly after, it was placed in the Long Gallery, above a seventeenth-century oak cupboard, where it still remains, a memento of both Lawrence Kay-Shuttleworth, who died in battle at Vimy Ridge, and the pure-hearted woman in New Mexico who made it. Notes 1. See two Mayan vessels collected by Charles St John Fancourt (1804–75), Superintendent of British Honduras 1843–51, given to the Disraelis in 1864, at Hughenden, Buckinghamshire, NT 428317 and 428318. 2. Dwight P. Lanmon and Francis H. Harlow, The Pottery of Zuni Pueblo, Santa Fe (New Mexico, 2008). 3. For comparison, see James Stevenson, Illustrated Catalogue of the Collections Obtained from the Indians of New Mexico and Arizona in 1879 (London, 1883), p. 343, fig. 361; and also a stereograph of a watercarrier, c.1873, in the Library of Congress, Washington, DC, lot 3427-3, no. 56. 4. Pieter Hovens, The Ten Kate Collection 1882–1888: American Indian Material Culture (Leiden, 2010), pp. 197–8. 5. The Times, 16 December 1879. For a copy of Frank Cushing’s Zuni Folk Tales (1901) owned by Rudyard Kipling, at Bateman’s, East Sussex, see NT 3114343. 6. Wilma R. Kaemlein, An Inventory of Southwestern American Indian Specimens in European Museums (Tucson, AZ, 1967), p. 50. Another early source for Zuni pottery in England was John Covington: see BM, am1888,0517.16. 7. Dan Hicks and Alice Stevenson (eds), World Archaeology at the Pitt Rivers Museum: A Characterization (Oxford, 2013), p. 432. 8. Gawthorpe Muniments, ‘A Brief Outline of the Resources and Facilities of the Rachel Kay-Shuttleworth Collection and Library’, 1967, p. 58; and Jonathan Batkin, ‘Tourism is Overrated: Pueblo Pottery and Early Curio Tradition, 1880–1910’, in Ruth B. Phillips and Christopher B. Steiner (eds), Unpacking Culture: Art and Commodity in Colonial and Postcolonial Worlds (Berkeley, CA, and London, 1999), pp. 282–300. Text adapted from Patricia F. Ferguson, Ceramics: 400 Years of British Collecting in 100 Masterpieces, Philip Wilson Publishers, 2016.

This pot was brought back by the Hon. Lawrence Kay-Shuttleworth in 1912 after a hunting trip in the USA with his brother-in-law (Bernard James). Part of Gawthorpe Textiles (RBKS) Collection.