The Life of Achilles 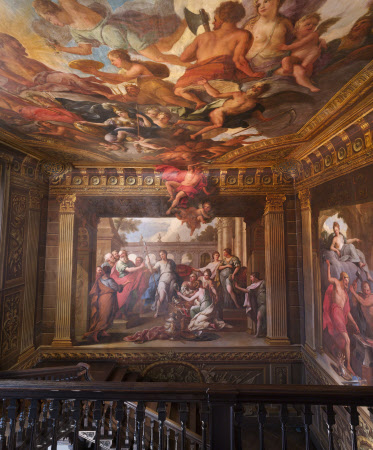 Oil paint on plaster and wooden laths, The Life of Achilles by Sir James Thornhill (Melcombe Regis 1675 - Stalbridge 1734), 1710. Great Staircase wall painting by Sir James Thornhill. The ceiling depicts an Assembly of the Gods including Zeus, Aphrodite, Dionysus, Athene, Cronus, the Furies, and Hermes descending to the human world below the cornice. The walls illustrate the life of Achilles as described in Homer's Iliad and Ovid's Metamorphoses. The west wall shows Achilles - dressed as a girl hiding among the daughters of Lycomedes - choosing the spear and shield instead of jewels brought by Ulysses. The monochrome scene below shows Agammenon removing Briseis, Achilles' concubine. The north wall shows Thetis (mother of Achilles) looking on as Hephaestus and his one-eyed smiths make a suit of invulnerable armour for her son. Below in monochrome is Achilles with the wise centaur Chiron. The landing (East wall) shows Ajax and Ulysses contending for the armour of the dead Achilles. A council of Greek commanders finally awarded the armour to Ulysses, whereupon Ajax went mad and killed himself. The window wall (South wall) shows military trophies between the window, and two scenes in monochrome below the windows: Pan, Apollo and Midas in their musical contest on the right, and Apollo and Daphne on the left. On the north wall of the Staircase two arches overlooking the stairwell at first floor level were originally planned, but in raking light it can be seen that these were blocked in and crudely plastered over before Thornhill carried out his work. Raking light also shows that Achilles was originally painted holding a sword rather than a spear. This is confirmed by the reproduction of the Thornhill’s drawing for the Staircase in the guidebook (p 19). The overpaint is original suggesting the change was made for compositional reasons. Similarly, visible underpaint indicates that three of the pilaster pediments on the west and north walls have been repositioned. There are seemingly two symmetrical doorways in the East wall, although that on the south side (opposite the stairs) is, in fact, simply a plastered recess painted in graining to resemble a panelled door and with architrave surround. The north door is real and gives entrance to the Blue Bedroom. It is also decorated with graining.