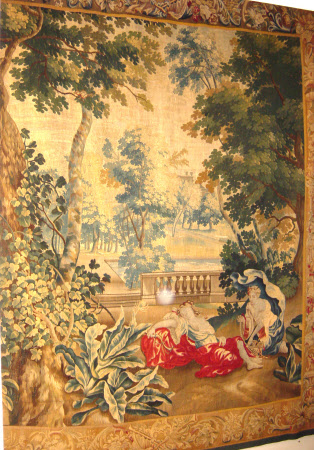 Tapestry, wool and silk, 6½ warps per cm, A Nymph Stealing Jewels from a set of three Mythological Scenes, Flemish, c. 1690-1710. In the foreground a young woman lies asleep on the ground, a red cloak draped about her, with a quiver of arrows behind her head and one arm outstretched holding a bow. Beside her a second woman stealthily removes a string of large pearls from a basket jewels. There is dense foliage at either side of the scene, and behind the figures a balustrade with a pool and a landscape beyond. The borders, which have been attached from an unrelated tapestry, are composed of flowers, leaves and scrolls on a light brown ground with helmets and crossed bugles at the top and bottom, and in two military saddles at each side of the lower border. (Helen Wyld, 2011)