Nymphs in a Garden 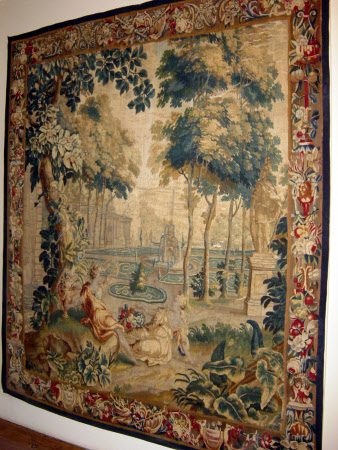 Tapestry, wool and silk, 6½ warps per cm, Nymphs in a Garden from a set of three Mythological Scenes, Flemish, c. 1690-1710. In the foreground two nymphs recline on the grass beside a tree. One rests her hand on a vase of flowers, and a strip of silk flutters free from her flowing dress, while the other seems to gesture to a large bunch of flowers behind her. In the background there is a formal parterre with a fountain in the centre between rows of trees, a classical pavilion with more fountains on the left, and on the right is a statue of a man in armour holding a shield. The borders, which have been attached from an unrelated tapestry, are composed of flowers, leaves and scrolls on a light brown ground with helmets and crossed bugles at the top and bottom, and military saddles at each side of the lower border.